.99 Reviews - Kristin Chenoweth "I Want Somebody (Bitch About)" 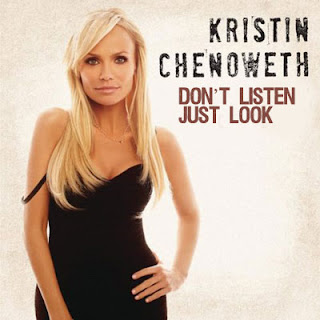 Kristen Chenoweth - I Want Somebody (Bitch About)
The People's Take
ugh (1 star)
by shell1120
really, love her, but this is crap
Crap (1 star)
by LeonardWilson
Rebecca Black sings better than her
UNBELIEVABLY FANTASTIC! (5 stars)
by AriannaTheofan
OMG!!!!! Absolutely IN LOVE with this song! Possibly me new favorite song! Kristin, is there any song you can't hit out of the ballpark?
Keep singing (5 stars)
by See me what
Don you there talk mad about her.
My Take
Where to begin, where to begin?
The beginning of the song maybe?
Kristen: "Hey, ha ha, yeah you, yeah y'all better listen up now, uh huh, huh! Okay!"
(Imaginary Producer: "Damn girl, are you sure you haven't been singing country all your life... good stuff! Take 5 and we'll get to the first verse!")
The first verse starts as such:
"I want someone I can talk to/All night anytime I want to/Who'll be there when I want/and won't be there when I don't want him to be." Folks, that's deep. I think writers like Jim Lauderdale and Darrell Scott should just hang it up now. The bar has been set way too high for them to get any more cuts in Nashville. Pack it up boys.
Enough with the facetiousness. I can hardly contain the bile rising in my throat after listening to this song three times in a row. I've already used up all the negative adjectives in the thesaurus on previous bad songs so I'll have to be a little more creative with my review of this steaming load.
I like Kristin Chenoweth. Let's get that out of the way. She's talented, funny, adorable and her duet with Randy Travis on his Anniversary Celebration album is excellent.
This song is the opposite of excellent. I challenge you. Hit that link in the title. Do it. See how far you can make it.
From the first word out of her mouth, you know the next three minutes won't better your life experience. By midway through the first verse (if you're still around), you're convinced you can write a better song with the local Montgomery Gentry cover band. By the chorus, you're feeling a growing sense that your organs are banding together to overthrow your mind for letting things go this far. By the end of the chorus, you're ready to jump into a Slayer mosh pit and leave the whole adrenaline and whiskey charged bunch lying in a pool of their own blood and broken limbs. If you make it to the end, you hate your ears. Or you're a blogger.
I listened to it a bunch so you don't have to.
It's lyrically insipid, vocally heinous (her voice just doesn't fit the style of the song) and generically produced. And the last half of the chorus... I don't even have the words.
Kristin has a master's degree in opera performance, she has appeared on Broadway numerous times and has many awards, including a Tony, to her name. All this, yet Nashville still saw fit to process her voice through some demonic vocal filter and throw in some weird mechanical sounding backing vocals. The finished product comes out sounding something like two feral cats mating on a rusty air-conditioning unit. Or maybe drunken harpies singing to the rhythm of a broken fan belt. I use a lot of hyperbole and the negative decriptions flow like water around here sometimes, but the chorus of this song is damn near torturous. Seriously.
I don't remember if it was Bucky Covington or maybe LoCash Cowboys or Soulja Boy, but this may be worse than any of those. It's certainly among the bottom 1 percentile of songs I've heard in my 36 years on this planet. And I've listened to a lot of songs.
It may have some kitsch value or possibly fall into that "so bad it's good" category, but what it comes down to is that this song is spectacularly terrible. An utter failure. We shall not speak of it again.
Total Value: .01/.99
The latest nonsense from Trailer at 4:00 PM