99 Cent Reviews: Chris Cagle - Got My Country On 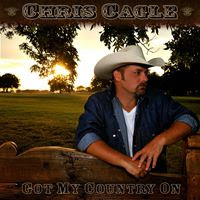 Chris Cagle - Got My Country On

It's nice to have him back and making music again. Really hope radio picks it up and supports him because he is a true artist.

If Chris Cagle has listened to the radio in his time away from the charts, surely he's noticed by now. If he's read Chet Flippo's CMT.com articles, Saving Country Music's rants, Country California's fake news or quotes, Farce the Music's anything (unlikely), or even a few random newspaper articles (even less likely), he must have recognized the trend.

I know you're familiar with the trend. Not only is it cliché; even mentioning it is cliché. I'm speaking of the "how country I am" songs in constant spin mode on your local country station since 2003. Complaining about them is almost as common as the songs themselves.

Based on his new single, Chris Cagle is either incredibly (almost willfully) ignorant, terribly stupid or does not give one single shit about the over-saturation of the subject matter. I'm going with a mixture of stupidity and not giving a shit – you couldn't not notice (could you?).

I guess Cagle and his management/record company figure that this type of song has basically become its own sub-genre in which at least 50% of the singles of that ilk find their way into the top half of the charts. It's like shooting fish in a barrel almost, so maybe it's not stupidity, on second thought.

Whether or not it's a good business decision to follow the canyon-sized ruts in this road is not my concern. My problem is with the bull-headed resistance to originality in today's country music scene. I'm not asking for a new political bent or even a change of scenery… but surely there are stories lived on these standard-issue backroads that could provide a much more interesting and personal connection between artist and fan. Country radio has truly become McDonald's. You always know what you're going to get, no matter if you drop in tomorrow or next November. While it's expected and guiltily appreciated from a fast food restaurant, standardization is tiresome and lazy when it comes to what is supposed to be an art-form.

There's little need to critique the actual sound of this song. It's what you're accustomed to from an upbeat country song these days. Loud guitars with a rock riff, ample drums, charging vocals. Jason Aldean is the standard-bearer for the modern country male, and Cagle does little to differentiate himself from that style.

Don't even get me started about this whole "get/got my _____ on" phrase. Unless I get a letter in the mail that says "You just got your million dollars on," I don't want to read or hear it.

This song reeks of desperation. Cagle's long absence from country radio's heavy rotation has led him to be a mere follower to artists who came after him in hopes of a return to commercial success. That resumed success is certainly possible, but suck-cess is guaranteed.

The latest nonsense from Trailer at 1:27 PM