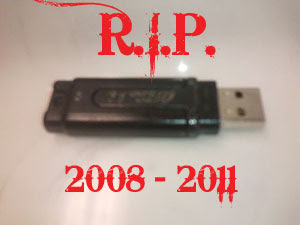 There has been a disturbance in the force. It has nothing to do with Rascal Flatts joining the Opry or Kenny Loggins singing at the CMAs. It's all my fault this time.

I knew this day was coming. Every time I pushed that little 2 GB drive into my computer, it fit a little more loosely. Every now and then a doc file on it would corrupt for no apparent reason. Sometimes I'd get warnings that the drive couldn't be accessed. Still I persisted. Oh, I backed it up every now and then… like once a year. Well, it's been several months now since that worn black flash drive has been backed up. And yesterday it happened.

The Official Farce the Music Flash Drive® has died. And with it, hundreds of Photoshopped album covers, several satirical lyrics, archives for months of old posts, some free fonts, a few ideas for a new masthead/logo (I'm getting sick of the one you see above), some charts and graphs, the remaining 3 songwriting tips from John Rich, the remaining 15 or so Songs Illustrated, my fodder folder - which housed dozens and dozens of potential album cover farces…. all gone.

There were times last year when I thought if this day ever came, Farce the Music would have to end. I mean, it probably should. I barely have the time to do this. I work, I commute farther than I should have to, I have a wife and kids… and Farce the Music is just a hobby, right? I don't make any money off this. Also, I was burned out. I mean, how many ways can you say Jason Aldean sucks, go listen to Shaver you loser, and keep it interesting and fresh?

2011, however, has been a fantastic and reinvigorating year for Farce the Music. Blog hits have grown steadily (nowhere near the half a million hit heights of my buddy Rita's site, mind you), Reginald Spears was a viral smash, and I continuously receive emails and Tweets of appreciation for what I do at FTM. That helps a ton. Also, my creative spark has burned a little hotter this year, bringing me new ideas for features and posts. I've been enjoying it again, and I hope you have too.

With the onslaught of evil forces massing at the gates, now's not the time to back down. Hunter Hayes is sharpening the tips of his frosted hair and Brantley Gilbert has already put his shoulder against the door, while potential saviors like Jamey Johnson have been summarily tossed aside by radio and awards shows. This fight still needs fighting. Covers need farcing! Lyrics need parodying! Douchbags need sackpunching! And Larry Lee's not happy either!

That said, …there's been a disturbance in the force. What that means for you, the faithful or first-time reader, is that things may be a little slower than usual while the storehouse gets refilled. I have no sense or system of organization, so album covers I've made fun of before may get Photoshopped again. Jokes may be repeated (hopefully not, they were bad enough the first time). November's Country Day may be shorter than usual. Bear with us. If you should take a notion, you can even send in your own covers, music jokes or reviews and I may post them. (see the addresses at the upper right)

Thanks for being a subscriber/visitor/lover/hater of Farce the Music. We lost a huge chunk of material yesterday, but hopefully this will just be an opportunity for a fresh start rather than a stumbling block. Stay tuned…

The latest nonsense from Trailer at 1:30 PM