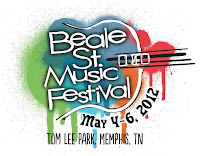 Living in the deep south and not having pockets quite deep enough to go to Jazzfest in New Orleans or Hangout on the coast, Beale Street Music Festival is the only festival I can frequently attend, so I make a point of going as much as possible. This year, I missed Friday due to needing to work, but was still able to make it to Memphis for 2 hot, fun days of music. The crowd was down a little this year probably because the headliners weren't quite as big as usual, but you still can't get this much entertainment for $75 anywhere else. And as hot as it was, the weather was wonderful, considering it didn't rain for the first time in like, ever. Here's a rundown of who I saw at the festival.

Saturday
John Hiatt - We caught a few songs from Hiatt before heading over to Drew Holcomb. Sounded good. Other than his biggest "hits," I've never been a huge Hiatt fan, so I didn't feel guilty for cutting out.

Drew Holcomb and the Neighbors - Probably would be megastars if they changed their genre from pop-rock to "country"…way more interesting guy/girl duo at the lead than Sugarland possesses. Warm, melodious set full of great hooks and killer vocals.

Son Volt - What you'd expect from Jay Farrar, as far as stage presence, but the band sounded GREAT. Jay's vocals were excellent too. You know what you're getting with a Son Volt show, but there's nothing wrong with being all about the music. Finally got to hear my favorite song, "Windfall" in concert.

Childish Gambino - Culture and genre shock going from Son Volt to Donald Glover's rap alter-ego. Despite counting myself at least a moderate hip-hop fan, this was my first rap concert. The bass felt and sounded amazing. Childish Gambino was out to prove his rap cred and he did so. It got a bit tiresome midway, with no conversation breaks (guess I was hoping he'd do a little comedy routine in the middle or something), but he's a strong performer who never got winded and proved himself a true hip-hop artist, not just an actor doing a side gig for fun. Huge crowd for this set.

The Cult - I'd heard bad things about Ian Astbury and the boys live beforehand, but they were solid. They rocked pretty hard - some of their newer songs were very punk sounding, much less arena rock than the songs that made them (semi) famous. Ian was pretty engaging and though he didn't try particularly hard, they put on a good show.

Grace Potter and the Nocturnals - Hell of a show. Grace is a thoroughly engaging performer and her vocals were top notch. She also played nearly every instrument on the stage over the course of the show. Her band is tight as a drum too. Go see 'em if you get a chance. Not an ounce of disappointment from this one. Another big crowd for this set.

Jane's Addiction - Tired old man syndrome kicked in just before this set, so we only made it halfway through. Hey, gimme a break… I'm over 35, it was 90+ degrees most of the day and I'm a desk jockey. Jane's Addiction's set was much more lavish than earlier performers. They had digital screens, crazy lights and people hanging from circus swings. Perry Farrell was a great showman and the band seemed very much a well-oiled machine, despite the sound not being that great. I heard my favorite tune  ("Mountain Song") and their biggest hit ("Been Caught Stealing") so I didn't feel too bad calling it a night.

Sunday
Old 97s - Awesome show. Best sounding band of the weekend, for my money (of course Union Station is surely "better" but I'm more roots rock than bluegrass oriented). Rhett Miller was friendly and his voice was great as the band played all their better known songs ("Big Brown Eyes," "Question," "Barrier Reef" etc) along with some from recent albums ("I'm a Trainwreck" "Every Night is Friday Night"). Perfect set.

The Chris Robinson Brotherhood - I prefer Robinson's harder rocking Black Crowes work, but his folksier side is also worth seeing live. Tight band, strong performance from Chris. A little jammier than I prefer, but I'd rather see them than say, Phish, any day.

Black Stone Cherry - We got our hard rock fix in at this show. Hottest freaking show of the weekend…. it was 93 and we couldn't squeeze up into the shade of the overhang, but we toughed it out with some adult beverages. Black Stone Cherry rocks hard; the guitarist seems straight out of some 80s hair metal band and he was the 2nd most energetic performer I saw this weekend, running around the stage nearly the entire set. BSC's vocalist is a treat to behold live - soulful and unique. These southern hard rockers played their biggest hits like "Blind Man," "White Trash Milllionaire" and "Like I Roll" along with a few cool covers like Joe Walsh's "Rocky Mountain Way." Very talented band. The drummer was nuts, all afro'd out and a blaze of arms and fingers - he once threw a stick at a stagehand mid-song… and never missed a beat.

Michael Franti and Spearhead - Far and away the best show of the weekend. While the focus was more on love and fun than music, the band didn't slack at all, and Franti is surely one of the greatest live performers working the circuit right now. He spent a good third of the show out in the crowd, all 6'6' of him, singing, playing guitar, slapping hands and spreading love. I've read in previous concert reviews that this is their usual show protocol, but it didn't come off anywhere near "going through the motions." The atmosphere was sincere, warm and vibrant. They opened the show with "Everyone Deserves Music" and went on to make me think everyone deserves to see Spearhead live. Much like the Beastie Boys, Spearhead just has this vibe and broad appeal that's so contagious, I can't imagine anyone hating them. Other songs they played included "The Sound of Sunshine," "Say Hey (I Love You)" and "I Know I'm Not Alone." Despite the overwhelmingly positive bent of the performance, it never felt cheesy or awkward. This is a band with "it," whatever "it" is. Beach balls, cute kids on stage and other cute kids leading chants from the audience… the gruffest and most cynical individuals among us couldn't help but smile the whole show. Franti's a liberal, but I'm pretty sure you could get Congress in a Spearhead show and they'd agree on nearly everything by the last song. I don't care if you're not into reggae-influenced dancehall pop rock, if Michael Franti and Spearhead do a show close to you, be there.

The Civil Wars - As talented as you've heard. As boring as you may suspect. They were cute and cuddly and sounded great, but unless they pump up the volume a little in the future, I don't see them maintaining their level of popularity.  "Poison and Wine" was the highlight for me.  Huge crowd for them.

Alison Krauss and Union Station - Call it heresy, but we only stuck around for about 5 songs before moving on to Robert Randolph. I do want to hear a full show from AK at some point, but we were more in the mood for some bluesy slide guitar on this night. Alison sounds as good, no better, than you've heard. I swooned. The band was of course, untouchable.

Robert Randolph and the Family Band - Excellent, loud, supremely talented. Great show in the blues tent. How did this guy not get a full stage? Anyway, awesome set. Cool lights. I was tired so I don't remember a great deal more, but it was a nice end to a hot, fun weekend.

The latest nonsense from Trailer at 3:00 PM