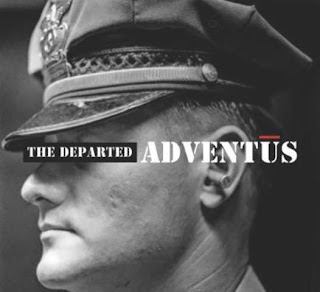 Southern Rock has always owed a large debt to the blues for it's roots, and with the formation of The Departed, it could be said that former Cross Canadian Ragweed frontman & bassist Cody Canada & Jeremy Plato have gone back to their roots.

I greatly enjoyed This Is Indian Land, the debut album from The Departed, but it felt rather like a Ragweed side project.  Understandably so, given that this tribute album to great Oklahoma songwriters was the labor of love that Canada & Plato had both spoken often of wanting to do while still in Ragweed.  Sure, the album had plenty of unique touches, particularly Seth James bluesy take on his guitar parts & the addition of keys by Steve Littleton (a musical heavyweight on the Oklahoma scene for years even before the ascendance of Ragweed) but Indian Land mostly served as a placeholder to whet my appetite for the new music that would hopefully be coming soon.

With Adventus (from the Latin for "Arrival") that appetite is sated.  Make no mistake, Indian Land was a fine album & an outstanding tribute to many of my own musical heroes, but Adventus is the sound of a dream fully realized, stomping the boards & defiantly proclaiming it's place in the American musical landscape.

This is no Ragweed album, and I sincerely hope (in spite of my nearly 20 years of affection for the band, a band I truly felt like I grew up with) that this album will put all the comparisons to bed at last.  This is definitely it's own animal & you know it from front to back on the album.  Cody Canada's name may still be nearly synonymous with the band, but the contributions that elevate this album from good to great come from the fact that the rest of the band is so perfectly in tune with the vision.  I don't know if it's Cody's vision or a truly shared one, but I'd guess that the entire band is perfectly in tune with it.  It would be nearly impossible to pull off something this good that remains so unique in scope & style, without every single member being equally on board.

I could go through this album song by song, but I doubt anyone wants to read that many paragraphs, so I'll just point out the things that jumped out to me the most on my most recent listen.

The Seth James penned tune, "Prayer For The Lonely" is just about as moving & gut-wrenching honest as song-writing can get.  If you are a fan of Red Solo Cups this might be out of your depth.  However, if you are a thinking human, you can't help but find it moving for all the right reasons.

The lead single "Worth The Fight" blew me away the first couple listens.  I'm sure it will do well within the regional charts in Texas & Oklahoma.  This song deserves to be getting spins nationwide though.  I don't know how they could've chosen a finer song with which to tell the world "This is who we are.  This is what we are about.  We are here to stay & you're gonna like it."

The cover art is great.  I grew up on albums (you know, the big black plastic CDs?) and even when CDs came along there was very little I enjoyed more than poring through the booklet, examining the cover art, reading the notes & checking out the lyrics.  The music industry as a whole has gotten away from that, and of course the digital download boom has been the biggest reason, but I can say that after seeing the cover photo (taken at a Led Zeppelin concert in Dallas, the police officers working security used bullets as makeshift earplugs because Led Zeppelin was LOUD [you rap/metal loving kids have NO idea]) I was just in love with the concept immediately. I will be ordering the Vinyl edition just as soon as possible.  Sadly, I missed out on the pre-order for a signed copy, but I still cannot wait to add this to my vinyl collection and enjoy the full tactile experience in edition to the auditory treat that is the album in any format.

In summary, if you're a fan of anything that Cody Canada, Seth James, Jeremy Plato, Steve Littleton or have done in the past you will love this album.  If you're a fan of good bluesy rock n roll you will love this album.  Shoot, if you're just a fan of good music with some substance, you need to pick up a copy.  So get Adventus & celebrate the true Arrival of The Departed on the scene.  I expect this album to fill a high slot on my 2012 "best of" list, and I expect it'll be one of your favorites as well.

--------
Adventus can be purchased at Lone Star Music, iTunes, Amazon and all the other usual retailers.
The latest nonsense from Trailer at 11:00 AM