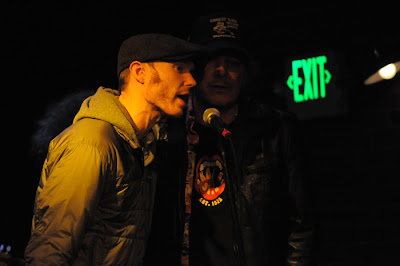 I've known Kasey Anderson, as much as you can "know" someone you meet on the internet, for probably 10 years now. I first came into contact with him on the message board at altcountrytab.ca as he began his songwriting/recording career. He always came across as a funny, bull-headed, eccentric self-promoter, but his posts were always interesting. His music was a little too raw for me at first, but it began to catch my ear as he grew as a writer and performer.

Kasey's first solo albums were uneven, but passionate and showing all the creative spark and hard fundamentals required for a budding music career. Nowhere Nights started fulfilling his promise with "catchy alternative pop rock Americana goodness" and slotted at FTM's #8 album of 2010.

When he took on The Honkies as a backing band, his music really took off. Anderson's first release with new backing band, Heart of a Dog, nearly cracked the FTM 2011 top ten albums. The desolate ballad "Exit Ghost" from that album was FTM's #2 song of that year. Let the Bloody Moon Rise, which was a short-time release (originally slated for physical release this year), finished at #54 in FTM's Top Albums of 2012 list. Clearly, Kasey was right in the pocket creating the kind of honest music I dig and that FTM promotes.

The band even made some headway in the commercial world, scoring an opening slot with Counting Crows on a European tour. The Crows also covered Anderson's "Like Teenage Gravity" on last years covers album, Underwater Sunshine.

Kasey's wit and dry approach also brought him some notoriety on Twitter. He gained thousands of followers and became fast contemporaries with professional comedians like Rob Delaney (even doing a show with Delaney) and Harris Wittels. Not bad for an alt-country singer/songwriter.

Cut to August or September of last year when Anderson began vague talk of retirement on Twitter and in his email newsletters. Then came the October Tumblr announcement that he was in fact giving up writing and performing for financial reasons. I didn't give it much thought, other than hating that a good young alt-country voice was going to be silenced for a time.

The Honkies disbanded and Kasey disappeared from my radar completely at this point.

This is where it gets weird. I'll let the professional writers do most of the talking from here. This story came out in December.. I somehow totally missed it. Wow.

And yesterday it got much worse.
Make sure you read at least this link... then you might want to go back and read the other one for more insight.

Holy shizz. Well, that escalated quickly. Or maybe it didn't. I don't really KNOW Kasey. Sure, he kicked off the FTM Interviews feature with this winning self-Q&A. Sure I've conversed with him on Twitter and altcountrytab.ca many times ...but I don't know him.

I just thought Kasey was a little askew, but maybe I should have seen the signs. There were always complaints of fans not receiving albums and merchandise they purchased from him. His self-promo on ACT was a little grating at times and Anderson became seen as kind of flaky amongst regular contributors.

Oh and then there was this one instance in 2009 on the message board where he sought legal advice because "i am facing erroneous charges of insurance fraud and falsifying documents." Uh oh! Kasey claimed he was held overseas for an allegation that "involves an insurance claim that was filed in america for a large sum of money - about 150k." According to Anderson's posts, his case was eventually thrown out by the prosecutor. Scarred but whole, Kasey persevered. Not that big of a deal in a vacuum, but in the light of this new, much larger situation... certainly interesting.

I don't know what to think. While I, as someone with not exactly perfect mental health, can sympathize to some degree with someone suffering from bi-polar disorder, I can't make the jump from drinking/druggin/financial woes to HALF A MILLION DOLLARS IN FRAUD. And the names involved and the excuses made and the self-delusion. I just don't know. I didn't even want to bring that last paragraph's information to light because of some sort of loyalty I can't explain. Kasey may be a con-man. He may be a troubled individual that got in comically over his head in a ridiculous scheme that even the investors should have seen through from the get-go. Probably both. He's a talented dude either way and I wish the best for him.

This case, regardless of its outcome, may have killed his music career. Perhaps if Anderson gets out of this hole, he can use his comedic talents and this whole new wealth of content to create a new, legal way to make a living. It's got to pay better than the (alleged) failed-fraud racket.
The latest nonsense from Farcer at 11:00 AM