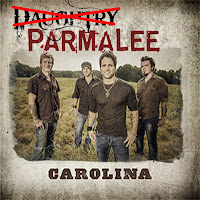 Failed rock band turned "country" band, Parmalee's first single "Musta Had a Good Time" sucked. That saved me having to waste any time writing about it because I had my doubts it would become a hit (though I did pick on it in graphic form). I can't say the same about "Carolina," so something must be said.

Parmalee may have thrown their hat into the country ring, but they are most certainly, not country. These words will echo previous ones said about Brantley Gilbert's "Kick It In the Sticks" and others of that rock ilk, but this song bears no resemblance to country music whatsoever. In fact, it barely even fits in with today's degraded country scene. Parmalee is Daughtry (the major label band with a Bleeding Cowboys logo, go figure). Not the country version of Daughtry, just Daughtry. Remember them? Chris Daughtry won American Idol (or was a runner up or something, but I don't care enough to Google) with a great set of pipes and proceeded to waste them on Nickelback-lite tripe. That's Parmalee. They even sound a helluva lot alike. Nothing changed except for the genre they're marketed for.

Why do I care? I care because "Carolina" is a catchy, decently-written pop-rock song that will almost certainly become a hit. Why haven't I given up on the contemporary scene altogether? Miranda, Chris Young, Zac Brown Band, Kacey Musgraves and a few others.... that's why. There's still some glimmer of hope shining through the dreck. Maybe it's just the dying embers of real country music smoldering in the pop downpour, but it's something to rest some hopefulness on.

If songs like "Carolina" become the norm, anything with the slightest twang (that isn't singing about the usual laundry list material) will have no chance gaining a foothold on the charts. I've said it before, but I might actually listen to country radio (even with bands like Parmalee and pop singers like Taylor Swift populating the mix) if the big umbrella of country was actually spread wide enough to cover the various forms of the genre like alt-country, Americana and traditional country. That's not happening. If anything, it's closing tighter...around anything that trumpets country in name only. And that's why something must be said.

"Carolina" itself isn't particularly awful, nor is it any good. It's an anthem about the singer hating to leave his woman at home when he's on tour and relating different aspects of her to the various places he does shows. It's moderately poetic, well-performed - as far as delivering from the script proficiently goes, sentimental and yet, miles from original. Sounds like a top 5 hit to me, but I hope not.

I realize there's nothing new under the sun, but couldn't Parmalee have let the daisies grow over Daughtry's career before hijacking his schtick? Is the pop-cred window of opportunity so quick to close that nobody hears this blatant theft? Are country radio listeners too young to even know who Daughtry is? Has anybody noticed that this same version of the song has been around for YEARS... from back when Parmalee were rockers instead of carpetbaggers?

I'll just end this wandering rant here before it starts to make any sense...

Rating (song only): C-
For its potential further damage to the term "country": F
The latest nonsense from Farcer at 11:00 AM