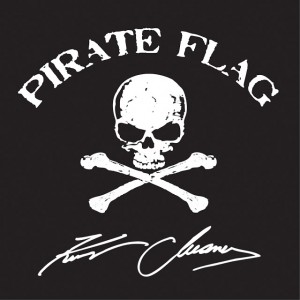 (Listen to the single here)

Kenneth Chesney's latest beach-centric tune attempts to stand out from his enormous catalogue of similar work by going the full Tom Petty. "Pirate Flag" is heartland rock n' roll with a verse melody so eerily close to Petty's "Mary Jane's Last Dance," one has to wonder if that may come up for legal discussion at some point. The theme is typical Chesney - giving up the rat-race for the Jimmy Buffett lifestyle. While Kenny has expanded his repertoire to include some more mature singles in recent years (El Cerrito Place, You and Tequila, Somewhere With You), he reserves the right to fall back on his go-to island boy schtick whenever something more appropriate his age-group fails to chart in the top 10 (El Cerrito Place). Does it sound like a beach song? Hell no. The darker musical approach doesn't line up with the imagery at all... except for the pirate flag, I suppose, but Chesney's no gun-toting boat raider, so nothing lines up. It's not a terrible song. I'm just of the opinion that if you're not going to do something that at least attempts to break new ground, either vocally (this is Kenny Chesney we're talking about), lyrically (um no) or musically (paging Tom Petty), what's the point? Treading blue Caribbean water, I suppose.

C-
The latest nonsense from Farcer at 1:00 PM