Album Review: Dallas Moore Band - Blessed be the Bad Ones 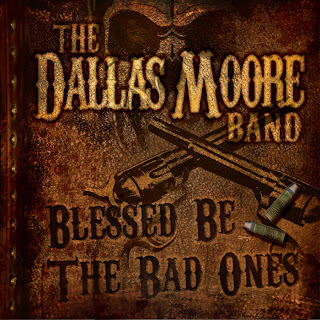 My excitement to get a full listen to this album was pretty high and other than an initial problem with the download, (satellite internet stinks) I was not disappointed. The album kicks off with the perfect starter song for a Dallas Moore record which is also the title track "Blessed Be The Bad Ones." From the first line "To the nights I can't remember and the things I won't forget" you know you're in for a modern-day outlaw country trip into the honky-tonk of your mind. This track provides the perfect cadence and subject matter for Dallas's vocals and rolls into the next track "Sometin' Changed" quite nicely.

Track 3 provides a faster-paced song in "Where You Gonna Be When I'm Gone" that kind of catches you off guard on the first listen, but quickly becomes a tune you'll listen to over and over. Dallas comes in at well above adequate with the rasp in his voice actually dropping to an all time low on this one. The female backing vocals are also spot on. If they would actually play it, FM radio would benefit from this song. "Slippin' and Slidin'" continues with the upbeat pace that rolls you right into "Texas Tornado" for that perfect made for a honky-tonk song that ends up breaking into a bit of a name dropping session, but will be forgiven since it mentions Hillbilly Jim (of WWE and SiriusXM Outlaw Country).

The classic tale of a good person that stumbles in life rings through in "Condemned Behind The Wall." Dallas provides a fresh approach to something that's been written about multiple times and provides a good sing-along and pleasant listen.

Coming in next is "Dirty Rotten Filthy." In my opinion, this along with "All of Those Good Times" are the weakest songs on the album. Without strong context they might bring the album down a notch or so, but luckily each is followed by new versions of classic Dallas Moore Band songs. ("Carolina Sunshine" and "Crazy Again," respectively.)

I'm hoping if you've made it this far into this review, you don't need to know much about "Carolina Sunshine" or "Crazy Again." For those unfortunate souls that aren't familiar with these two songs I'll say this: They're awesome and this may be the best version of "Crazy Again" I've heard. "Carolina Sunshine" is slightly lacking compared to the previous versions I've heard, but is still high in quality for sure.

The final two tracks "The Ballad of Sweet Marie" and "Last Man Standin'" couldn't be more different from each other, but somehow they perfectly compliment to each other. From down and out, murder, and self realization to on top of the world in 8:22 to wrap up the album the way it should be. In the last track Dallas may provide the one line to describe his style of country music perfectly in the lyric "I was a stone cold stunner and a midnight runner cranked up way past 10."