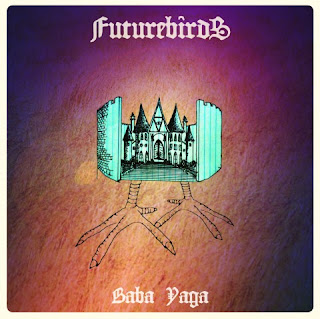 According to Futurebirds' website, the making and shopping around of the new album was a massive headache and seemed to be doomed from the beginning.  Thus, the name, Baba Yaga.  Baba Yaga is a witch in Slavic folklore who could be either good, bad, or ambiguous.  Luckily for us, good prevailed, and the album was able to see the light of day nearly 2 years after it was begun.

One thing that really grabbed me about Futurebirds the first time I heard them was the reverb that drenched every song.  Also, the reckless abandon that permeates out of the songs like any moment things might fall apart.  The whole thing could just collapse.  Maybe the reverb holds everything together.  Whatever it is, I want neither attribute to change for the Futurebirds.

When the first song, "Virginia Slims" kicks in on Baba Yaga, it's clear that we have the same Futurebirds.  You get the distinct feeling that maybe this was all recorded in a church with no air conditioning.  The heat of the South seems to drip from every player in the band.

Trading off vocal duties, each track feels very familiar, but very distinct.  The straightforward country-rock of "Tan Lines" differs from the slow-burn, dare I say, psychedelic rock of "Death Awaits." The great thing about Futurebirds is they know how to make these styles fit perfectly side-by-side.  They transition, with ease, from one style into another.

For many, the reverb added to the vocals is somewhat of a turn off as you can't quite pick up on some of the lyrics.  There is a feeling that it was not mixed correctly.  But, this is part of the charm that I find in the Futurebirds recordings.  If you're curious as to the level of reverb, think My Morning Jacket's The Tennessee Fire.

For me, this is one of the best albums of 2013.  It's perfect music for a hot afternoon; to just sit on your porch or patio and drink a beer or 3.  This set of songs sees Futurebirds hit their stride and not let up.  The band has benefited from years on the road and has grown into a tight-knit band, albeit a tight-knit band that loves playing closely to the edge.

Go listen to the album here.  Not sure how much longer it will be up, so do it quickly and discover your next favorite band.

Also, pick up their previous albums here and the new album here.

RIYL: My Morning Jacket, Shovels & Rope, Dawes, Calexico
The latest nonsense from Farcer at 11:00 AM