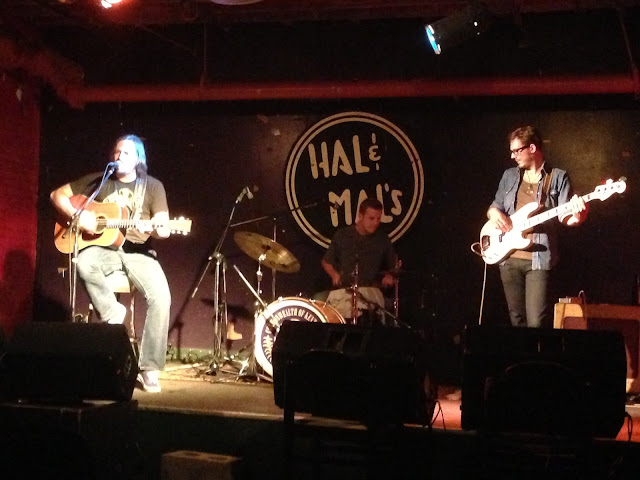 Sturgill Simpson was missing a band member when his tour rolled around to the "City With Soul." The rigors of the road apparently took their toll on one of the High Top Mountain bandmates, so Simpson let us know that they'd be "doing a little something different" that night.

Something different was Sturgill on guitars, mostly acoustic, with a drummer and bassist… so I'm assuming it was a guitarist who quit/took a break. Anyway, it may have made for a difference in sound, but not in enjoyment. The trio was tight and powerful all night, though I suspect High Top Mountain may normally have a bit fuller sound.

The evening's music started off with a rowdy rendition of "Some Days." Simpson's trademark ramble of a Kentucky drawl immediately made it known that this would be a night of hard country and honky-tonk music, if anyone had any doubts going in. He followed that up with 4 more cuts in a row from the High Top Mountain album, seeming to grow a bit mentally worn in the midst of this run. Apparently he was sandbagging though, because Sturgill and his ensemble proceeded to tear through another twenty songs, seemingly gaining interest and energy as the set progressed, before shutting things down.

Simpson and the boys played nearly every song from High Top Mountain and several tunes from his previous band, Sunday Valley. This still left room for plenty of surprises in the way of one unrecorded track and several great covers.

The new song was the only one I managed to get decent video of, and coincidentally was also the one Sturgill requested we not record because it was subject to change. Uh, sorry Sturge. It was a solid entry to the Simpson catalogue, titled "Living the Dream."

As the show finished out with a couple of song from the drummer (who's a solid singer in his own right) and a couple from solo Sturgill, it was apparent they'd caught a powerful second wind and weren't ready to quit. However, time constraints and the fact that they'd already laid down 23+ songs for the small but appreciative audience called the evening to a close.  Simpson let us know he was headed back to the hotel for some after-hours swimming and that was that.

If you get a chance to catch Sturgill and High Top Mountain live, grab the opportunity. They put on a passionate show that puts their deep love of music and knowledge of country's history on full display. It's well worth whatever pittance in the 5-20 dollar range you have to put forth. Great show (and cool, laid back guys too… wow, they're chill)!