Single Review: Blackjack Billy - Get Some 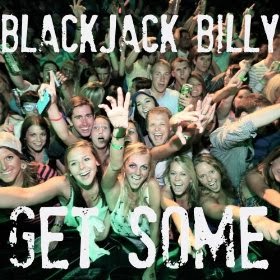 Blackjack Billy's "Get Some" is D-List bro-country that's not even catchy enough to garner guilty pleasure status from anyone with properly functioning ears. It sounds like one of those sub-par tracks tacked onto the end of the Promo Only Country CDs which featured some local bar band out of Port St. Lucie who was owed a favor. It's another party anthem objectifying women over loud guitars, with some vaguely urban slang thrown in. Any questions?

The basic concept of the song is um, booty shaking, I guess? That pretty much covers it. In the chorus, "Hey honey, shakin' that money maker" is rhymed with "working what the good Lord gave you" because of course it is. It's cliche to even call those lines cliche, because they aren't anything nearing an even half-hearted attempt at art. They are gospel verses from the Douchebag Bible, added verbatim into the song.

"Baby, all I wanna do is get in your groove girl" is an actual lyric that a human wrote and sang over music and some commercial music entity saw fit to release it for public consumption. What is this, a 2 Live Crew song? Oh, I get it… it's supposed to be a subtle double-entendre. No, let's be real - these guys think an "entendre" comes filled with refried beans and covered in guac at Taco Bell.

Oh, and dude doesn't want to ask the girl to dance because then he'd have to stop creepin' on her and staring at her ass. That's restraining order territory right there, homey. This would be the pinnacle of Nashville's new misogyny culture if this were a song that would make a dent on the charts. Here are the respectful terms used to call upon this lovely young female: mama, pretty thing, honey, baby, girl, sugar. Yes, I'm serious.

Thankfully this band will go the way of the "Harlem Shake" sooner than later. There may be some talent in Blackjack Billy, but none of it has made itself known to this point. Forget guilty pleasure, "Get Some" isn't even worthy of "so good it's bad" consideration. It's just awful.