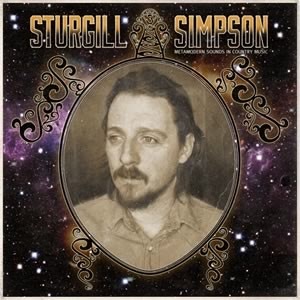 There's hardly a point in reviewing the new Sturgill Simpson album. Most of you who read Farce the Music in a non-ironic way already love his music or at least respect it. Ol' Sturge, who was a few mere months ago playing places like Hal & Mal's in Jackson, MS to 20 appreciative fans (including me), is now the toast of the town. He's opening for Jason Isbell. He's getting pub on NPR, Fader, The Wall Street Journal, Juggs and more these days (okay, not the last one). Suffice it to say, people get it.

Metamodern Sounds in Country Music is epic. Despite there only being 9 songs on the official release (plus a bonus track), this is a big big record. Simpson takes the hard country brilliance we all loved on High Top Mountain and expands on the textures and topics. He gets weird in a few places, trippy and edgy even, but it never feels like a put on. This is where Sturgill wanted to go and hopes we'll come along.

The opener (and first single) "Turtles All the Way Down" pretty much draws the line in the sand. If you're willing to give a song that goes the long way around (and I mean, Phoenix to Calcutta long), questioning religion, legacy, and drug laws, to basically say love is all that matters... a chance, well then, you're in for quite a ride.

"Life of Sin" follows that up with a down-to-earth honky-tonker that still manages to dig a lot deeper into the troubadour psyche than you'd expect. It sounds like a Waylon standard, 30 years after.

Later on, "The Promise" takes an 80's new wave hit and turns it on its head. What was once bouncy and emotionally cool is now thoughtfully considered then laid bare. It's as 'original' and stirring a cover song as I've ever heard.

Before Metamodern Sounds has completed its strange journey, Simpson takes us through gospel glory, internal journeys and back into a psychedelic howler of a closing track. He covers a lot of ground on this album, but the transitions are so natural you'll never notice till your head is swirling 30-something minutes later. Albums don't come much more highly recommended from this source. Sturgill Simpson has created a monster of an album that not only created its own buzz-storm, but is more than worthy of the hype.

-------
Metamodern Sounds in Country Music is available (5-13) at Bandcamp, iTunes, Amazon and wherever else you'd find great music.
The latest nonsense from Farcer at 1:30 PM