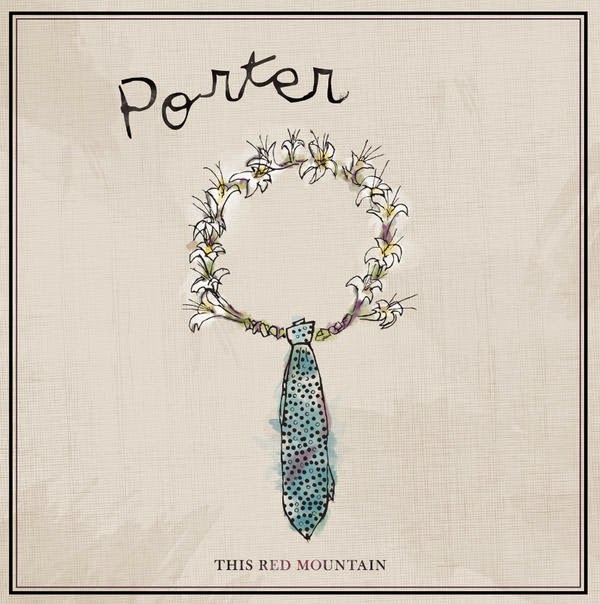 I've been listening to This Red Mountain for a few weeks now and it's by far my favorite work of Chris Porter's (Some Dark Holler, The Back Row Baptists, Chris Porter & The Pollies) busy career thus far. It has an all-star supporting cast and an alt-country legend at the producer's helm in Will Johnson. I hope to write a review of the album at some point, but for now, they're letting FTM give you guys a full album stream! This Red Mountain is out today and is available through Porter's website and at Amazon. A write-up/bio for the unaffiliated follows the album stream. RIYL: Bonnie Whitmore, Drive-by Truckers, The Pollies,  Sixteen Horsepower.


Porter - This Red Mountain
release date: March 10, 2015
"Heres to the myth of a man’s redemption, for every other time that he stood there wishing, that she would do the leaving, so he could put it in a song." - Porter, This Red Mountain
Porter spent his formative years sharing songwriting and lead vocal duties in his previous projects, The Back Row Baptists and Some Dark Holler. Upon making the decision to leave the comfort of shared pressure, it took Porter over a year to conceptualize, write and record his debut solo release, This Red Mountain. He considers it the most sincere work of his career, and every aspect of its creation reflects this sentiment. Weaving in and out of lives filled with heartbreak, loss, redemption and joy, the songs of This Red Mountain reveal the story of a man’s lowest lows and the difficult journey back to peace and perspective while living his life on his own terms. “I reckon,” Porter says, “that guy is a lot like me.”
Family
Porter’s move from Birmingham to Austin was not a career choice. Years of constant touring, recording and writing led to nearly all of the cliched, spirit-breaking tolls that the life of a career songwriter can manifest. His new relationship with musical co-conspirator Bonnie Whitmore (who also lends her talents to This Red Mountain) was a source of hope, and—with her encouragement and support—Porter relocated to the Live Music Capitol of the World. This period of his life is what every track on This Red Mountain is about—the good and the bad. Each musician on the album was instrumental in helping him turn this corner of his life and career. These people are not just studio musicians; Porter considers them family.
Will Johnson (producer, This Red Mountain) - Will has consistently pushed the boundaries of music with his bands Centro-Matic & South San Gabriel and his countless other solo efforts and collaborations with artists such as Jim James, M. Ward, Conor Oberst, Vic Chestnutt, Jay Farrar and the late Jason Molina. Porter wanted to make This Red Mountain stand out among its peers, past and present; Will was crucial from the album's conception in achieving this goal. All tracking was done live at Ramble Creek Studios in Austin, Texas, with Britton Biesenherz turning the knobs.
The Players
Chris Masterson (guitars, pedal steel, mandolin, baritone, organ, vocals) - Chris is one of Porter’s closest friends and is regarded as a consummate musician. He is currently the lead guitar player for Steve Earle & the Dukes, a former member of Son Volt, and has shared the stage and studio with numerous influential artists. His work with his band The Mastersons is particularly important to Porter as an example of pushing the boundaries of "Americana." (Chris appears courtesy of New West Records)
Eleanor Whitmore (guitars, fiddle, baritone fiddle, tenor guitar, mandolin, vocals) - Eleanor has shared stages and studios with Regina Spektor, Bruce Robinson, Kelly Willis, Diana Ross and Will Hoge. She is also currently a member of Steve Earle & the Dukes, and one half of The Mastersons. Her fiddle playing and vocals on This Red Mountain are heartbreakingly gorgeous.
Falcon Valdez (drums) - Falcon was instrumental in the "Zero Genericana" standard Porter and Will set from the beginning. Will, Falcon and Porter worked closely together to develop the pulse of This Red Mountain. Falcon has worked with The Happen-Ins, The Mastersons, Craig Finn, Corb Lund, Ray Wylie Hubbard, Carrie Rodriguez, Todd Snider and more.
Bonnie Whitmore (bass, vocals) - Bonnie deserves an endless amount of credit for bringing This Red Mountain into the light of day. Her bass playing and vocal presence provide the foundation for its most haunting moments, and her vocals on "Don't Let Me Go" are a high point. Bonnie has played with a number of notable artists including Hayes Carll, Justin Townes Earle, Mando Saenz, Drew Womack and Jon Dee Graham.
Jon Dee Graham (lap steel, good advice) -  Jon Dee gave Porter his first gigs in Austin and has been a constant source of guidance in every aspect of Porter’s musical development and career. He is an absolute legend. Porter considers it an honor to have him perform on This Red Mountain. He even did the album art.
The latest nonsense from Farcer at 10:00 AM