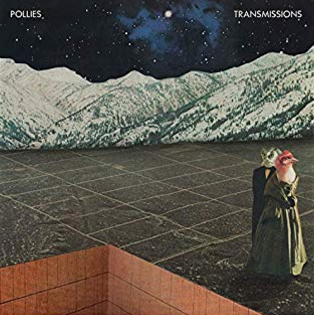 The Pollies have had a busy, if somewhat quiet career since their debut came out in 2012.  They've released 1 other full-length album, have backed Chris Porter on an EP, and have, of late, been backing Dylan LeBlanc around the US and Europe.  In that time they have stretched their musical muscles and expanded the sounds that made their first two albums so intriguing.  Now, they have released the retro, but positively modern, new album Transmissions.

With pulsing synths opening up the album, the Pollies let you know that a band from a place with rich musical history (Muscle Shoals, AL) can still shatter what it means to be a Southern band.  While decidedly Southern sounding on most of the album, there are moments of freakouts such as the midway point and end of "Knocking At My Door."  These are well-served and welcomed additions to these songs, adding a layer of intrigue to the perfectly crafted pop songs on the album.  (To be fair, I've always been a fan of any sort of freakout moment on an album, so maybe I'm just biased.)

Jay Burgess and crew have started to hone their hook skills with beautiful rock songs like "Love's To Fault" and "Hold On My Heart."  Burgess's voice is perfect to carry across these songs of loving and longing.  You know how Lindsay Buckingham is the only person who could ever sing "Tusk?"  Burgess's voice just ties all of these songs together with his raspy, wistful voice.  Listen to "Lonely" and try to not be moved.

At their core, The Pollies have always been a pop rock band with tendencies to stretch out songs.  Southern pop rock has always been a rather unglorified but important genre.  Bands like Big Star put Southern pop rock on the map, but there are a number of bands emulating that style today (one other that comes to mind is Belle Adair out of AL, as well).  The Pollies are carrying that torch and making that sound all their own.

If I had one complaint, I would say that I almost wish "You Want It" was a bit muted on the synths.  It's an interesting inclusion, and I almost like the addition.  But, it gets to be a bit glaring and doesn't quite fit in with the rest of the album.  The rest of the songs are incredibly well thought out and balanced.  "You Want It" misses that mark, for me.

Still, Transmissions is worth the price of admission.  You won't be disappointed with the contents.  This is an album of perfect summer tunes- almost wish I had the whole summer back to enjoy this one with the windows down or out on the river.  In a different life, The Pollies would be getting their due on the radio, but that is not the world we live in.  Instead, you should go out, buy this and every other Pollies album, and share or buy one for your friends/family.

New Video: The Pollies - She

From their excellent 2015 album, Not Here.

Email ThisBlogThis!Share to TwitterShare to FacebookShare to Pinterest
Labels: New Videos, The Pollies

From their excellent 2015 album, Not Here.