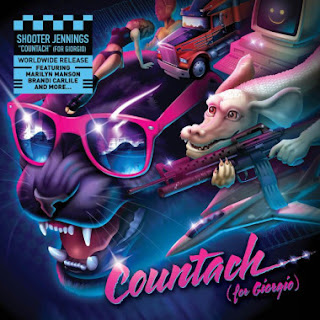 
One thing you can count on when it comes to Shooter Jennings is the dude does not give a fuck what you think. When everyone wanted him to do one thing, he does the complete opposite. Someone says “career suicide” and guess what? The dude will ride straight into that storm with both fingers raised.

How else could he have had the guts to record his masterpiece Black Ribbons when everyone wanted a Waylon copy? Sure, why not release a concept album that has more in common with Clutch than whatever’s playing on country radio. Shooter’s next move? Just when everyone thinks he’s gone and left them for Mars, he drops Family Man – a traditional country record that was razor sharp, and able to put folks in their place with one swoop. And with both of these choices, he was about to cement his ability to morph into anything he wants to be; that’s the power of Shooter Jennings. Let’s not get lost in forgetting The Other Life, either. It’s also so overwhelming to think about in one musical palette, but it all belongs to one man.

On Shooter’s newest record, Countach, no one could have predicted what would come next. A dizzying array of textures and sonic landscapes, Countach is a schizophrenic look into a mind that’s overflowing with musical ideas and too stubborn to stick to one thing. Countach shouldn’t work, but it does. The sounds land because the record doesn’t feel like a collection of songs (see: Black Ribbons) but an overall vision. The mood drops and swells, always daring the listener to see where they’re willing to go next.

For god’s sake, the record is a synth pop meets country, disco funk party that has cameos by the late, great Steve Young and Marilyn Manson. Putting it in a category is the impossible task not fit for any human. Some moments feel appropriate for an 80’s love scene ala Miami Vice while others speak at the darkest recesses of what we think Shooter is. Who else is capable of mixing pedal steel with pop-heavy synths?

Countach isn’t for the traditionalists, and it’s not for someone who’s expecting a return to whatever preconceived form you think Shooter Jennings needs to adhere to. There is no form. There is only what he chooses to pursue.

Oddly, I feel this Bruce Lee quote best describes Shooter Jennings musical vision:
“Be like water making its way through cracks. Do not be assertive, but adjust to the object, and you shall find a way around or through it. If nothing within you stays rigid, outward things will disclose themselves. Empty your mind, be formless. Shapeless, like water. If you put water into a cup, it becomes the cup. You put water into a bottle and it becomes the bottle. You put it in a teapot, it becomes the teapot. Now, water can flow or it can crash. Be water, my friend.”

If this quote means something to you in how you feel about music, buy Countach – you’ll be better for it and grasp its vision.

Countach is available at BCR Media, iTunes, Amazon, Spotify, etc.
The latest nonsense from Farcer at 11:30 AM