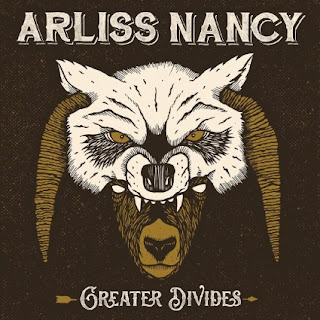 A Review by Matthew Martin

One of my favorite albums of the last 10 years is The Gaslight Anthem's The '59 Sound.  There is something so immediate and so basic in the words and the music.  It made me long for something that I couldn't quite grasp, or even comprehend.  Like, maybe the band, and maybe even I, had been meant for a different time or era.  Or, maybe it just made me want to drive for hours - sitting still didn't seem like an option. It was a pretty strong mix of feelings immediately after hearing that album.  It still makes me feel that way.

While I have continued to dig most of the Gaslight Anthem's releases after that album, it's been a while since they have made me feel that longing.

And, that's where Arliss Nancy comes in.

Beginning with Simple Machines, I have had the distinct gut-punch feeling with every Arliss Nancy release. Greater Divides is no exception.  There is something within each song that tugs at the listener to reach deep, to think about those times that maybe were less than great and reflect upon them.  Maybe we could have changed those outcomes.  Hell, maybe we could have avoided them altogether.  But, really, this is life and mistakes are part of it and that's what makes it so fun, or at least, interesting.

"Try to remember a time when everything was different and everything felt alive," sings Kyle Oppold on "Before You Go."  Or, take Cory Call's opening on "Finches" where he laments a lost love while watching his dog chase birds.  It's simple, but it's affecting.  We've all been there- doing something so mundane that dizzily brings back some sickening memory.

Relationship failures and successes are where Arliss Nancy shine.  These failures and successes alternate between themselves, friends, and exes from song to song.  "Much of Anything" and "Brother, I Tried" are Kyle and Cory's takes on a call to arms against all the obstacles and problems that can be frustrating for a smaller, independent band and dammit do they work.  I can almost see the massive hugs after each song.

When I first listened to this album, I was a little put off (very slightly, mind you) by Cory's new singing style- it's a bit more high pitched.  However, that was barely an afterthought after the 2nd and 3rd listen.  This is the only kind of album I ever want Arliss Nancy to make.  I hope they continue to do this exact sort of thing for years to come.  The band is tight, the music is wonderful, the songs are as good as any the boys have ever written, and this album is one of their best.

One of the things I've never been able to do for whatever reason has been see Arliss Nancy in concert.  I hope that changes very soon, so guys if you're reading this by some coincidence, come to D.C. and let's have a beer.  And everyone else, if you are on the fence about this album, just take the plunge and buy Greater Divides right now.

Greater Divides is available on Amazon, iTunes, the band's site, etc.
The latest nonsense from Farcer at 10:00 AM