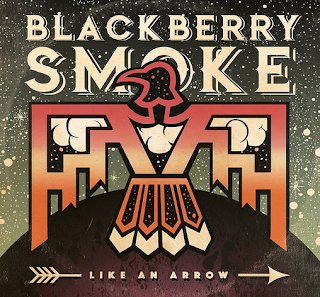 There's something to be said for consistency and dependability. Some consider those descriptors to be boring, but I think they're sturdy and certain. Without the unfailing constants of minerals and gravity, we'd all be floating in the void. Some things just are. Some bands just are.

Blackberry Smoke is. They are and they endure. If you want steady and meaty southern rock n' roll, look to them. Like the mountain, they stand strong against the winds and rains of change. If you're a fan, do you want to hear Blackberry Smoke has cut their hair and smoothed their edges for country radio? Do you want to hear that they've hit the LSD tabs and decided to explore progressive rock? Hell no! We want Blackberry Smoke to give us thick riffs, hard twang, real life, and foot stomping grooves!

That's what they do on their new offering, Like an Arrow. It wasn't broke, and they didn't fix it. Lead man Charlie Starr still has a cocky whine to his voice and he still spits attitude and proverb filled lines about drinking, living, and love. The rhythm section still kicks, they keys still pound, and the guitars still rip.

Opener and first single, "Waiting for the Thunder," is appropriately electric and a gripping welcome back. It's all buzzing guitars and big harmonies and there's even a great organ into guitar breakdown at the bridge. If this song doesn't get you fired up, rock music might not be your thing.

Later on, "The Good Life" breaks you off some fatherly advice. Songs like this run the risk of falling into the "listing songs" category, but Blackberry Smoke keeps it real by focusing more on the messenger and on applying the message - proving that walking the walk is always a bigger impression than talking the talk.

"Workin' For a Workin' Man" is a growling anthem for the blue collar man. It's fraught with anger and determination. "This bait and switch is a son of a bitch" sings Starr, full of piss and vinegar at the injustices eternally shoveled upon the laborer.

"Free on the Wing" closes out Like an Arrow with a guest appearance from Gregg Allman. The song finds hope at the end of a relationship, exploring the ways people move on. The harmonies are especially sweet on this track.

Like an Arrow is a perfect title for another great effort from Blackberry Smoke. An arrow goes right where it's aimed, time always rolls on by, some stay low, some get high, and Blackberry Smoke only puts out Grade A slabs of country flavored Southern rock. If you've never given them a listen, they're highly recommended to fans of Whiskey Myers, Fifth on the Floor, Skynyrd, The Black Crowes, etc.