Kelly Hogan of The Flat Five: Going for Positive Broke In a World of Love and Hope 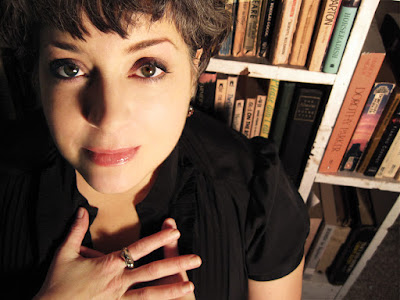 Going for Positive Broke
In a World of Love and Hope

“Okay, I’m almost ready,” says Kelly Hogan. “I was driving, waiting for your call, now I just have to pull over and find a parking space.” She eases into a comfortable play-by-play: “I may just turn off on this side street…almost there…well, why don’t you just go ahead and start to talk?”

Hogan has, according to her hometown Chicago Tribune, “the range of a gospel belter, the phrasing of a jazz diva, a bit of a country twang, and a taste for humor that make her something of a difficult fit in these category-obsessed times.” If she’s tough to pigeonhole into a genre – and she very much is – then it’s doubly tough to pin down a category for The Flat Five, the Windy City super group she formed with Scott Ligon, Nora O’Connor, Alex Hall and Casey McDonough. Their debut album, It’s a World of Love and Hope, drops today on Bloodshot Records; fitting, as that label has always been home to the genre-bending misfits of independent music. Ligon and McDonough are themselves members of NRBQ, a fluid band – founded 50 years hence – that has always defied classification.

But, to take a stab at Flat Five comparisons: Late 60s/early 70s harmony-laden pop with a slight bubblegum flavor, reminiscent of The Carpenters, Beach Boys and Beatles. Some Manhattan Transfer. Or maybe that’s a little off? “Yeah, it reminds me of childhood, hearing the AM radio in the Rambler station wagon,” Hogan says. “All of those sounds like Sly and The Family Stone, The 5th Dimension, Spanky and Our Gang…and The Archies! Definitely The Archies.”

Yeah, that’s better. And, oh, the harmonies; five parts’ worth sometimes. Groovy electric piano.  It’s pure, unadulterated, unmitigated, undeniable joy. This can’t be overstated; it’s an album of existential happiness, as the campy title suggests. Each of the album’s dozen songs were penned by Ligon’s older brother Chris, and if you drill down a little into that dude’s catalog, you’ll want to throw in They Might Be Giants and Dr. Demento when making comparisons. As joyfully bouncy and bubbly as this record is, there’s also a lot of downright quirky, head-scratching humor.

But the joy overrides all. You want to feel better right now, when the whole country and world are spiraling downward into hades? Turn off Twitter and Facebook. Turn off the news. Listen to this album a couple times through, and you’ll be physically happy. Heck, it’s impossible not to be happy after 20 minutes on the phone with “Leather Lungs” Hogan, after she finds a parking spot. Her mood is as infectious as The Flat Five’s music.

You’ve worn a lot of hats in a bunch of different bands/side projects, etc. This Flat Five record certainly has a distinctive flavor to it. How has working on this project differed from, say, The Pine Valley Cosmonauts or any of your other endeavors?

Well, a lot of the things I did with Pine Valley Cosmonauts, I was like a ninja. I’d come in real quick and record one song and be done. The Flat Five, we’re a band. It’s gross. We love each other so much, it’s gross. We’ve been doing this since 2005 or something. I started out playing with Scott Ligon, then we got Nora O’Connor into it; I knew her from when we both sang in Andrew Bird’s band. It just sort of picked up, like a rolling stone…wait, a rolling stone doesn’t gather moss. (Laughs) We snowballed, that’s what I mean to say.

We just really love to sing together. And even with our five separate, crazy schedules and the stuff we do with other bands, we’ve always made time for this. We just love it.

When did y’all decide “Okay, we’re gonna do an album,” and how and when did that process finally come together?

I guess a couple years in, we made a commitment to play quarterly. That’s a time commitment and everybody has to block out time on their schedules. We started talking about playing more often and how we would do it. And we were warming up to the idea of doing an album of Chris Ligon’s music, because we had already been doing several of his songs [live].

So that idea developed, and we all got really excited about it, because one, we love his music and two, we want more people to hear it. So in lieu of going door-to-door (laughs), we knew we needed to record. That required us all to pledge allegiance to each other and commit. And so it’s taken us right at two years; we first went into the studio in September 2014. We financed the whole thing ourselves, so occasionally it was, “Well, we’re out of money, so we gotta play a show.” And luckily we were able to record it at our drummer’s studio, and he engineered it. There was just a lot of goodwill and teamwork involved. 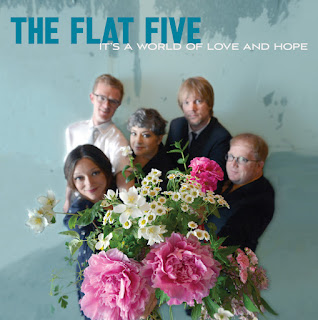 This album bubbles up joy. Can you describe how much fun it was to record?

We made a conscious decision as a band, led by Scott, that we were gonna do a positive album. And I mean, I love sad songs. I’ve heard great songs with awesome harmony, but it’s like “My baby died in December.” (Laughs) So we tried to make it a cohesive thread, and all positive. Because everything’s so heavy, you know? You said “bubbles,” and not every song sounds effervescent, but the material and the message are designed to lift people, you know? Mavis Staples just did that on her last album.

And we were trying to decide what to call this record, and I said, “Dude, let’s just go for positive broke and call it ‘It’s a World of Love and Hope.’” In the face of all this evidence to the contrary; there’s so much going on to be sad and mad about. And all of us in the band, we’re all mad and sad and scared. This is just a little respite. I mean, I’m on the street in Chicago. The trees have colored leaves and people are walking their dogs…it’s Halloween. That’s just as real as all the bad stuff.

Well, we are weird, you know…

(Laughs) Well, I don’t mean just because it’s a little off and has some tongue-in-cheek…

…People try to describe us. Right now Nora and I are trying to book a tour and folks ask us, “Well, what kind of band are you?” And we’re like, uhhhhhhhh, well…

I think we’re like a pack of Life Savers. You’ll get an orange and a lime, and all the different flavors. We just love it all; we love all kinds of music. 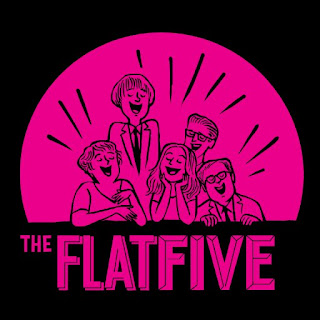 Do you have a favorite cut on the album?

(Pauses) Uh…gosh I don’t know. It’s so hard for me to pick from all the different flavors. I don’t think I do. I can’t pick a favorite puppy! I love them all, and they are all different. Some of them were more difficult to get right in the studio than others. I do love the magic of “Bug Light.” I like “Bluebirds in Michigan;” I love that really weird string/bass/flute arrangement.

I’m curious, and this is a Kelly Hogan-centric question. I discovered you as the voice of Cassie Gaines on DBT’s Southern Rock Opera. Do you hear that every now and again, maybe from folks down South?

Oh! Awesome. I love that’s the case; I really love that album and I love those guys so hard. But yeah, a few, a few, definitely. That always makes me feel so proud. We did that at (Mike) Cooley’s house and I was in the dining room with a microphone, drinking a PBR and they were all in the kitchen. I finished a take and I heard some screaming and I found out they were screaming because they liked it. That was really cute.

That album…well, “Angels and Fuselage” makes me weep to this day.

Think about how hard it is to sing it! Because I sit in with them sometimes, and I try to do it – like every song I do – like I’m living it. And those lyrics…it’s just such an honor to be on that record. And you know, hearing your Southern accent, I’m just leaning into it because I love those accents so much. Any excuse to call Patterson (Hood), I’ll do it, just to hear that voice.

What else would you like folks to know about It’s a World of Love and Hope?

Um, it’s definitely an album made by friends who really love singing together. We love it so much we’ve all made time to do it over the last dozen years. We’re the kind of band that will practice together for seven hours and it seems like seven minutes. I mean, if we were at a club to play a show and nobody showed up, we would still play the show! We do this because it’s so much fun. And that’s the spirit It’s a World of Love and Hope was made in.

Final note: I’ve not played an album over and over like this one in recent memory and subsequently tried to figure out why. I’m still not sure, but what’s exceptional is this wonderful Venn diagram of the underappreciated Chicago music scene. In fact, when you put elite-level talents like these together – all of whom share such a passion for the craft and an unselfish love for one another – greatness shouldn’t be surprising. –JKB

It's a World of Love and Hope is available today on iTunes, Amazon, Bandcamp, etc.
The latest nonsense from Farcer at 11:30 AM