Becky Warren's album War Surplus was named on a couple of ballots for Farce the Music's Top Albums of 2016 list, and today we've got an exclusive premiere of her lyric video for the confessional drinkin' song, "She's Always There." Check out the biography and links of interest below the video for more information on this exciting singer/songwriter. Warren is recommended to fans of Lucinda Williams, Mary Gauthier, Cody Jinks, etc. 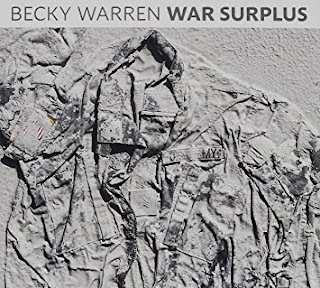 With her debut solo album, War Surplus, Nashville singer/songwriter Becky Warren relays the affecting, gritty and candid tale of the relationship between an Iraq-bound soldier named Scott and his girlfriend, June. As the story unfolds, the two meet, fall in love, get married and then struggle to hold it all together when he returns from his deployment a changed man living with the echoes of PTSD. From the record’s award-winning lead track “Call Me Sometime” straight through ‘til the last note, Warren’s potency as a songwriter is on full display, as she weaves a compelling musical narrative rooted in her own life experiences and the rich sounds of Americana and rock & roll, all the while channeling the bold yet unaffected spirit of Neil Young, the compassion and grit of Steve Earle, and the fiery, bourbon-soaked vocals of Lucinda Williams.
Supporting Warren on War Surplus is an impressive cast of Nashville musicians including guitarist and pedal-steel player Paul Niehaus (Calexico, Iron & Wine, Justin Townes Earle, Bobby Bare Jr.), drummer Dillon Napier (Margo Price), and Adam Wakefield (2nd place, The Voice), who sings backing vocals on “Call Me Sometime” and plays organ and accordion throughout the record. This talented pickup band joined Warren this past March for six days of sessions at analog-obsessed Nashville studio Welcome to 1979, with Warren’s friend and bassist Jeremy Middleton—a military veteran himself—handling production duties. “The fact that Jeremy had, in his own life, been through some of the same experiences on the record made him a perfect fit,” Warren says. “I had over 30 songs I could have used—he really helped me sift through everything and choose the ones that best told the story. And he did a lot of arranging.”
Beyond the top-notch musicians, brilliantly crafted songs and tasteful production, part of the reason War Surplus hits with such impact is the very personal, almost autobiographical nature of Warren’s material. Just like the June character she created, Warren married a soldier back in 2005. A week later, he was deployed to Iraq and eventually returned home with PTSD. After four tumultuous years of trying to work through the fall out, they eventually, amicably, split. So while Scott and June are characters, and their story is a fictional account, Warren has the advantage of knowing what it’s really like—of being able to draw from a deep well of personal experience, and it lends the record a powerful authenticity and empathy. And to take the writing beyond the scope of her own experiences, Warren also drew from several veteran-penned memoirs, in particular My War: Killing Time in Iraq by Colby Buzzell, a book that inspired War Surplus standout “Stay Calm, Get Low,” and ultimately led to Buzzell—a freelancer for New York Times and Esquire—writing the album’s liner notes.
A record concerned with real human stories, War Surplus is also refreshingly devoid of political posturing, and deeply respects the experiences of veterans and their friends and family. “The album deals with some heavy themes,” Warren says, “but it was also important to me that it be catchy and fun to listen to. I know it’s a really polarizing song, but  I’ve always loved Springsteen’s ‘Born in the U.S.A.’ It’s a serious song about Vietnam vets, but people still have a good time shouting along to it in stadiums.”
Long before Warren struck out on her own as a solo artist, all the way back in 2003, she played in Boston alt-country outfit The Great Unknowns, who signed to Amy Ray’s Daemon Records, toured with the Indigo Girls, and were praised by everyone from Maxim to No Depression. The band released the first of its two albums, Presenting The Great Unknowns, in 2004. But it wasn’t long before Warren’s struggles with her husband’s PTSD led her to take an extended break from music. “The whole time I wasn’t writing, it was very painful for me,” she says. “I couldn’t even really listen to music because it made me feel terrible. I was thinking about everything I was missing.”
Within a month of her divorce, though, she was writing again, and would eventually record a second Great Unknowns album, 2012’s Homefront. Though her old bandmates were now scattered across the country and unable to tour, Warren kept cranking out powerful songs, including “Call Me Sometime,” which won her the 2014 Merlefest Songwriting Competition and the 2015 Kerrville New Folk competition. It’s an impressive feat when you consider the past winners of these contests—career artists like Steve Earle, Lyle Lovett and Gillian Welch.
A 12-song concept record, War Surplus is Warren’s most fully realized work to date. The project began in earnest in 2012 when she attended a Johnny Mercer Foundation writing program where she met several artists who were involved with musical theater. “I was really interested in their process,” Warren says. “The way they focus on characters, and what motivates them.”
Warren wrote War Surplus’ alcoholic anthem “She’s Always There” during the Mercer program. From there, Scott was born, and with Warren’s more ambitious character-driven perspective, he took on a life of his own. “I could interact with Scott,” she says. “Talk to him, think about him. It was therapeutic. Writing a song, you’ve gotta get your thoughts to a razor’s edge because you don’t have that much time.”
With this new solo debut on the way, Warren is busy gearing up for a run of full-band and solo dates in support of the release. She hopes the record will resonate with a wide range of fans while raising awareness about veterans and PTSD. “There are so many people out there who have gone through similar experiences,” Warren says, “and I want to do everything I can to make them feel like they’re not invisible. And maybe at the same time, the record will lead some people to learn more about veterans' issues, and take some positive action.”
The latest nonsense from Farcer at 10:30 AM