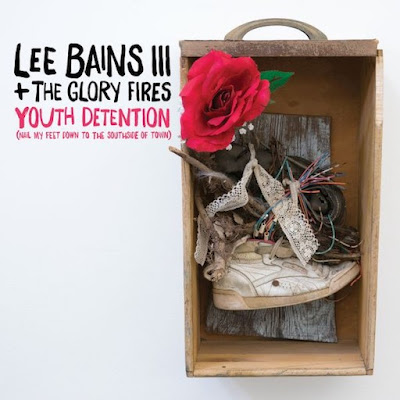 by Matthew Martin
We're in an age of unfettered voicing of opinions.  Maybe it's always been this way bubbling just beneath the surface, but with social media and 24-hour news, that squall is reaching a fever pitch.  Each side is pissed and each side fears the other.  It's in this vein that a lot of great music is made.

In the times of slavery, the spiritual was a song or a chant decrying the atrocities happening to those slaves.  During the Civil Rights movement, countless artists and songs decried the tragedies happening to the weakest among us.  In the 90s and 2000s, hardcore and punk bands railed against the state of the world- from consumerism to seemingly constant war.  I say all this to simply state that music is release.  It's an artist's take on their world view.  Sometimes that view may not be our view, but it's an important view and one we shouldn't scoff at or denounce, but take that view and check it against our own world view.

In 2014, Lee Bains III & The Glory Fires released the incredible, loud, in-your-face Southern punk rock album Dereconstructed.  I said when I first heard that album, and still believe, that there hadn't been an album that important to the South since Drive-By Truckers' Southern Rock Opera.  It was an album that took the quick-paced Southern rock on their first album and ratcheted up the guitar and turned a mirror on the South's transgressions while still maintaining that love most of us Southerners have for our region.  Bains and crew have once again taken a look at the South as a microcosm of the nation on Youth Detention and tackle it the only way we Southerners know how to- loud, abrasive, and mad as hell.

In the first five songs, Bains tackles injustices that happen to those that aren't powerful ("Good Old Boy" is a minute and a half of pure adrenaline-fueled punk) and then hits the nail on the head with "Whitewash."  While the song is slower than the first four, it's the one that hit me the hardest.  With lyrics battling what it means to lose a sense of self and place over time, including our Southern accents (this hit close for me because after moving out of the deep South, I've mostly lost my Southern accent), "Birthmarks to be scrubbed away," Bains sings.

"Underneath the Sheets of White Noise" is a song that LB3 & The Glory Fires were meant to play.  It's a damn good song full of the social commentary we've come to expect from Bains played again, fast and loud.  The surprise song on the album to me is "Crooked Letters."  This song is a typical Bains song with a trudging guitar riff and bass line with lyrics damning and self-reflective at once.  However, it has a loop played mostly throughout of children chanting the chant most of us in the South used to learn to spell Mississippi.  Upon first listen, I was a little turned off by this addition, but to be honest, I can't imagine this song without that loop now.  It's going to be odd to hear the song live without the chant!

The next four songs- "I Can Change!" to "Nail My Feet Down to the Southside of Town"- are the best batch of songs on the album with "I Can Change!" coming in at one of my favorite LB3 songs ever.  The driving guitar with squelching feedback are perfect backdrops for a song that grapples with guilt, ultimately delivering "Guilt is not a feeling, it's a natural fact."

The album ends with two damn good songs- the first being "Commencement Address for the Deindustrialized Dispersion" which again deals with the dispersion of Southern people to other areas, but ends with the chorus "May we all grow old and free, And wander home again."  Amen, Lee, amen.  And "Save My Life!" takes us home with a pure Southern rock and roll song about the life-saving and life-changing nature of rock and roll.  That's what it's all about, man.  Rock and roll is good for the soul.  It releases something in us all.

Clocking in at around an hour and 17 songs, Youth Detention is a break-neck speed of an album touching on everything a good punk album should.  If you don't like your music loud and your artists' opinions worn on their sleeves like a badge of honor, then Lee Bains III & The Glory Fires likely isn't for you.  But, if you're willing to challenge yourself and your beliefs and like your music loud, brash, and full of life, then this is for you. Bains' voice is as good as ever and the band is as tight as you'd expect a band that's been together this long to be.  This is album will be one of my favorites of the year.  If you've never seen the band live, go see 'em.  But, dear Lord, wear ear plugs...

Youth Detention is available on Amazon, iTunes, etc.
The latest nonsense from Farcer at 11:30 AM