Single Review: Luke Combs "When It Rains It Pours" 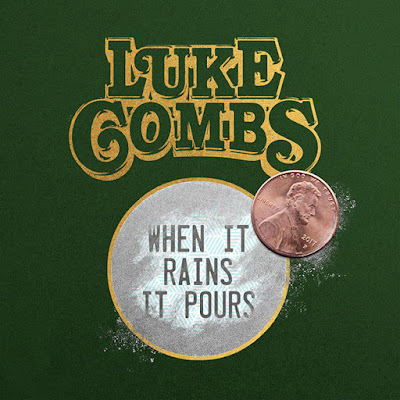 Great, the title’s a cliché. Here’s what else is country-by-numbers, rather than clichés, about this song, about whose music Trigger at Saving Country Music wrote…well, what he usually writes.

1 There’s a gruffness in his voice that is very Stapleton. This isn’t cliché yet but soon we’ll be complaining it’s as common as the words ‘hey girl, get in my truck’ on the radio.
2 The key is F-sharp, not cliché in itself but a very resonant major key that opposes the message of the lyric..
3 …Which is about hanging out with the guys, drinking beer, going out on the road, playing golf, going fishing and forgetting he’s now single. There are three types of country song: need the girl, got the girl and (as here) lost the girl…
4 …But Luke has a new take on heartbreak, with the guy delighted to be rid of the girl, heading straight to ‘I-65’ down a long freeway.
5 The guitars chug away in a Southern rock style in 4/4 time, and this will sound great cruising down the highway at 65mph.
6 He mentions the radio, ‘the FM dial’, but only because he’s ‘caller number five’ and wins a trip to Panama.
7 Antonyms: birds do it, bees do it, even educated country writers do it! Here, Luke sings ‘What I thought was gonna be the death of me was my saving grace’. It’s a good line.
8 The second chorus has a fun lyric about going out with a Hooters waitress. I wonder how much sponsorship money he’ll get from that…
9 The bridge before the last chorus, delivered appealingly, perhaps says that every cloud has a silver lining: ‘I been on one hell of a redneck road…It all started on the day that she walked out.’
10 The line that may inspire a t-shirt is ‘I ain’t never got to see my ex-future-mother-in-law any more’. Class, like so many other great lyrics in country. A comedy staple is the mother-in-law joke (at least in the UK it is!) so this line is delivered as a punchline to the chorus.

Ol’ Trigger may want more, but this one points to another big hit for Luke Combs.