Editorial: How Gun Violence Corrupted the Church of Music 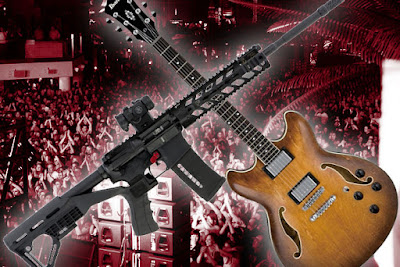 And here we are again. We can’t keep up with the news cycle, and our social media feeds are melting with comment wars and a whole lot of folks arguing about what it means to be an American. A lot of people are dead, and a lot more are wounded. A bullet now marks hundreds of people’s lives and yet we’ve been here before. We watch the news, we stare at our phones and we hold our breath as the stream of information flows inward, giving us the gruesome details, once again.

This is the new American Way. We turn on the talking heads, and just as the crow flies, someone is continually getting murdered by way of the gun. Every day, there are bodies stacking in Chicago or New Orleans. Every day, a child gets their hands on a pistol not secured properly, and every day, someone gets shot for absolutely no reason whatsoever.

The Twitter junkies and Facebook Keyboard Warriors will argue about that person’s right to that gun, about the second amendment. The body on the other end of that conversation will throw their hands in the air in disgust. The cycle is endless and ugly. And don’t believe for a second that your government will do a thing about it. The NRA owns the United States government, and more dead bodies mean more profits: consumerism is the child of fear. We learned that the hard way after Sandy Hook. These buffoons in ugly suits don’t care about you, they care about votes, they care about kickbacks, and they care about power. What makes you think for a second that they’ll put forth any kind of meaningful legislation when they can’t squash that pesky Obamacare they had eight years to solve?

I know people who should not have guns. When these people fly off the deep and turn an AutoZone into WarZone, I won’t flinch. We all know someone who has a gun that shouldn’t. The national conversation will devolve into “something, something mental health, yadda yadda” and they won’t pass a damn thing. It’ll get filed away with taxes, pork, or whatever convenient box once we shift focus to the next drama. Those crazies in our lives, they’ll still have those automatic rifles under their beds. Don’t worry.

I’m progressive liberal. I’m also from the south side of Chicago. I have lived in the south for the last decade. I have southern family and am married to a southern woman. I have shot automatic rifles. I have shot plenty of guns over the years, and I understand their appeal. But, what I don’t understand is the unwillingness to flinch when it comes to rights and freedom and all of that flag waving stuff that equates to nothing but more death.

But, despite the acumen of location or whatever, there’s one community that’s mine: the community of music. I go to as many shows as I can every year. I love live music. I love being able to say, “I saw that band back when.” That’s my passion. But, when my church, the church of glorious noise - a venue - is corrupted, that hits home. I have stood in countless crowds, both big and small.

I’ve been in rooms that broke every fire hazard code known to man, and I have stood in endless seas of bodies, waiting for our heroes to take the stage. To think that a show, the one place I truly feel connected with a world is compromised, makes me feel sick.

This world is gross, dirty and ugly. It’s got scars, and it has many issues. But, one thing that’s intrinsically yours is your music. And now, people are dead because they wanted that freedom and that moment to throw their hands in the air and shout along to their favorite anthems. Just like the Pulse nightclub last year, we’ve been compromised. People are victim to their passion of life: losing themselves in the beat of their favorite songs.

We lost Dimebag Darrell to gun violence, and there are a few folks in France who know unexpected suffering while attending an Eagles of Death Metal show, too. Same goes for the city of Manchester, England. But, those countries don’t have gun laws like we do. They have “isolated attacks” and we have “incidents at large”. They deal with larger scale terrorism coming from all sides, and we grow our psychos in our own backyards.

We never feel more connected and alive then when we share the experience of music with one another. We holler in the bar, or we beat our steering wheel like a bass drum in the car. We’ve now tainted that with liability to passion. We’ve poisoned the well of common sense with propaganda, that your rights dictate the will of the people around you. Congrats. You are no more free and you never will be.

We keep letting bad things happen because we can’t look ourselves in the mirror and say it’s time to stop this. Our egos are too big. We think everything is about us. And now, we cannot even hear our favorite songs. We’ve let those be taken away, too.

Those people didn’t deserve this. They deserved music and joy.

I’ll be looking over my shoulder, as is my new habit when it’s my turn to sing along.
The latest nonsense from Farcer at 12:30 PM