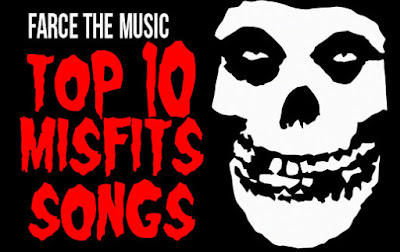 In the spirit of Halloween, every music site ever has to do a top 10 Misfits songs list, and honestly, we’re no better than your average pack of dorks with too much time on their hands. Anyhow, The Misfits are the quintessential Halloween band. They’re the godfathers of all things creepy intertwining within punk and metal. From songs about killing babies (not very PC, Glenn) to space monsters, the band laid a blueprint that’s pretty much one step below Black Sabbath in the lore of underground music.

Because it’s the season of the witch, it’s only right to let nerds duke it out in the comments section over my top 10 Misfits tunes. This list isn’t scientific, it’s the best I could muster up because I’m a fan boy who likes the band just a little too much and picking only ten is like picking which tooth I want pulled.

Disclaimer: There are no Michael Graves tunes listed. Why? Because while Michael Graves-era Misfits is pretty good, it’s not the same sport, it’s not even close. Yes, I will ackowledge Dig Up Her Bones is a catchy song, but it ain’t So I Turned Into A Martian. You wanna rate his songs? Go get your own overtly dork blog.

Anyhow, in the spirit of Halloween here are my Top 10 Misfits tunes:

I look forward to the comments telling me I missed Last Caress or Green Hell. I left those off on purpose. Argue away, nerds.
The latest nonsense from Farcer at 10:30 AM