Over the years, I’ve been to a handful of Sunday matinee shows at Annapolis’ Ram’s Head on Stage and one thing I’ve learned is that many touring artists are not used to being “on” for a 1 pm performance. Don’t get me wrong, Cracker, Rhett Miller, Robyn Hitchcock, and Lydia Loveless nailed their respective performances, but all joked in their own ways about not being used to playing so early in the day (kudos to Loveless at her show opening for Cracker as she was battling the flu).

That said, country vet Kelly Willis and her terrific band didn’t seem phased at all during their stellar early afternoon performance on Sunday June 10 where fans were more likely imbibing on bloodies and screwdrivers instead of the venue’s fine selection of their own microbrews (I was definitely in the screwdriver mood on this particular day). Yeah…

Willis, touring for her wildly regarded Back Being Blue (her first solo album in 11 years) made the most of her 90 minutes on stage focusing primarily on songs from the new platter and 1999’s What I Deserve, all the while peppering in songs from her nearly 30 years in music.

The title track from her new album, “Back Being Blue” kicked off the show. It was a perfect start to highlight her aching vocals that has clearly charmed FTM Grand Poohbah Trailer, who has already publicly stated it’s one of his favorite songs of 2018.

Willis immediately threw out a “bone” to older fans with an Easy track, the honky-tonkin’ rumbler “If I Left You” which featured killer guitar licks from guitarist/pedal steel guru Geoff Queen who spent the night seamlessly switching between electric guitar and pedal steel while adding subtle harmonies. Queen’s harmonies would come into play a few songs later during “What The Heart Doesn’t Know,” a song Willis admitted was her attempt at writing a 50s “country girl duo” song which she not only accomplished but added about her harmonist “Geoff does a good job being my back-up girl” which got a good laugh from the crowd.

Throughout her career Willis has had the good fortune to write with or perform songs from some of the finest writers in country music. She featured many in her set this afternoon including the title track to What I Deserve (Gary Louris of the Jayhawks), “Wrapped,” and “Not Forgotten You” by her husband Bruce Robison, “Sweet Sundown” by Damon Bramblett, “Find Another Fool” by Marcia Ball, and “Get Real” by John Leventhal.

One of the funnier moments of the performance was during the introduction of the country rocker/revenge song “Take It All Out On You” which was written by her first husband Mas Palermo and current husband Bruce Robison (who at the time of the song’s inception was on “a break” with Kelly at the time). She’s told the story many times over the years while touring with Robison and it still gets a good laugh as she explains that it’s the “song that qualifies me to be a country singer.”

Willis closed out her set with the last song off her new album, “Don’t Step Away,” which had boots a-tappin’…well her boots for sure…as most in the crowd were sporting flip-flops or sandals on a balmy spring day in our pleasant drinking town with a sailing problem.

Willis and her band triumphantly returned to the stage moments later to play What I Deserve’s “Cradle of Love” and the old-school rocker “Whatever The Wind Blows” by the legendary Marshall Crenshaw.

Kelly Willis is one of country music’s finest artists who sadly gets overlooked. She’s not glossy, stylish, or pandering to the masses. She’s the epitome of class with a sweet temperament that wows audiences with every achingly beautiful, twangy, bittersweet vocal. Her songs can elate as much as they can rip your heart out. And you should openly and freely let them do both when experiencing her music, whether it be in a live setting or listening to her records at home, because they are simply good for one’s soul. 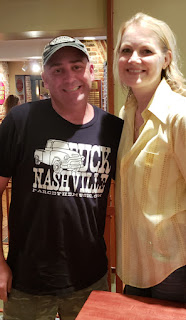