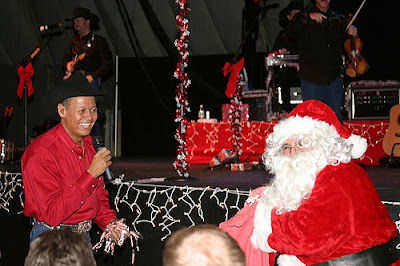 90s country superstar Neal McCoy released the seasonal song "Merry Christmas (I'll Put My Knee Up Your Ass if You Say Happy Holidays)" in November and has yet to see any country radio airplay. The jovial anthem, which bemoans the war on Christmas, is also seeing poor sales and negligible streaming numbers.

McCoy told us that while he is disappointed in the stats so far, he feels like the song will be one of those that becomes a standard for years to come. "Like my buddy Aaron Tippin says, you've got to stand for something or you'll fall for anything, and that's what this song does." smiled the still boyishly handsome McCoy, who earlier this year took a stand against football players taking a knee with the similarly un-listened-to "Take a Knee My Ass."

Neal's current song features the chorus:
"It's Merry Christmas
and I'm here to say
I'll put my knee up your ass
if you say Happy Holidays
Praise Jesus!
If you don't, you can leave this country and stay"

Country program directors tell us that the song has tested poorly. One anonymous PD told us "Despite the message resonating with many of our listeners, the word 'ass' just doesn't go over well with our audience, unless you're talking about a woman's sexy, daisy-duke-clad, tan-lined backside, that is. Also, Neal is old."

At press time, McCoy was in the studio recording his next topical country song, "My Ass Will Build the Wall Myself."