A Conversation With Andrew Leahey

“It seemed odd to lose my relationship with a manager and label because I made a rock ‘n’ roll record, but that’s what happened.” Andrew Leahey is stuck in Nashville traffic, talking to me about his new album, Airwaves, the making and release of which brought Leahey to yet another unexpected career crossroads. The good news this time around was, after undergoing a life-threatening brain operation and rebounding to play 180 shows in 2016 in support of his debut album, parting ways with a manager and label was, if not small potatoes, certainly a less dire set of circumstances.


“In Nashville it’s easy to lose perspective. Nashville is the center of the Americana world so when I took this album to my label and my manager, the immediate response was, ‘Well we don’t really know what to do with this,’ which is like, really? It’s not a hard-to-understand kind of music.” In fact, for anyone who grew up during the era when Tom Petty and the Heartbreakers or Bruce Springsteen and the E Street Band dominated the charts, Airwaves is a very-easy-to-understand and equally-easy-to-embrace album, full of bright, chiming guitars, swagger, and anthemic choruses. According to Leahey, this was very much by design.


“We started playing ‘Make it Last’ at shows before we had even begun working on the record and it caught on immediately,” Leahey says. “For me - for us - we play a lot so it was important to make a record where any song could kick off a show, or could close a show. Songs that were maybe bigger in scope than the songs on my last record. And as we saw people at shows responding to those songs, it was an indication to me that we were on the right path. I wanted to make a Heartland Rock ‘n’ Roll Thriller,” Leahey’s thought is interrupted by his own laughter, “on a much, much smaller scale, obviously.”


Leahey and his band, The Homestead (and friends, including the 400 Unit’s Sadler Vaden), succeeded there, and Airwaves is indeed loaded front-to-back with songs that recall Petty, Springsteen and T. Rex. “Flyover Country” edges closer to what Americana purists - if there is such a thing - may have expected from Leahey while “Working Ain’t Working” recalls some of David Lowery’s twangier leanings but, by and large, Airwaves is kindred in spirit to the bands now relegated to Classic Rock Radio.


This is not to say Leahey and his band are unwelcome in Americana circles by any stretch of the imagination. Long a fixture at Nashville venues like the Basement and the 5 Spot, and with an ongoing gig in Elizabeth Cook’s band, Leahey continues to run in the same circles he always has, maybe just a little further out towards the fringes. “It’s all the same small pond,” he says, “I guess I’m just one of the weirder-looking fish right now.”


“When I came back from the operation, I really had to start over -- to repay all my dues, with my own songs, working on other people’s records, all of it. I struggled with it but ultimately, I had to rediscover what it all meant because I’d had it taken away from me so -- not that I didn’t appreciate it before the operation -- every opportunity is meaningful to me in a very different way now.”

Perhaps because of that, and likely also because Cook is one of the most dynamic and talented artists to come out of Nashville in the last several years, Leahey isn’t looking to relinquish his role in her band any time soon. “I love playing with Elizabeth, and my hope is I’m able to continue to balance both jobs because that’s a really important gig to me. I guess if there comes a time when I’m unable to carry both workloads, that would be a pretty good problem.”


Beyond Cook’s band, Leahey mentions that in Nashville especially, he’s happy to be known as more than just a singer, songwriter or bandleader. “It’s important to me that people remember I’m a player, too,” he says, “it’s really important to have those two halves come together and make a whole.” 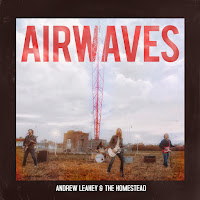 With Airwaves, Leahey has achieved that symmetry. There’s no filler here. Just unabashed, infectious rock ‘n’ roll from an unapologetic Disciple of Petty. But make no mistake, this is not imitation. Following in the footsteps of others without tracing those footsteps is a delicate balance but Leahey and his band pull it off admirably.


Having survived the Nashville traffic snarl, Leahey has arrived home to meet the demands of his cat, and my own dog has grown restless so we agree that this is as good a time as any to cut things off, but before we go I tell him that to my ears, this album is as much a testament to Leahey’s own survival as it is to Petty or Springsteen or Stevie Nicks or anyone else.


I tell Leahey he’s not alone. A lot of folks are glad he’s here now, too.

Airwaves is available on iTunes, Amazon, Spotify, etc.
The latest nonsense from Farcer at 10:30 AM