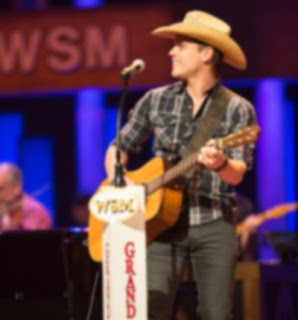 Some country singer you have never heard of, much less heard any music from, makes his Opry debut Friday night.

Hailing from a fond-memory-inducing podunk on the Kentucky horizon, the random male country performer reportedly grew up listening to the Opry on the radio. He also visited the Opry several times, and idolized quite a few artists who graced that stage. He also wears a cowboy hat and customized leather belts.

Whoever this guy is released his debut single in late December and has seen it rise steadily into the lower 30s on the charts. Tall, blue-eyed, and handsome, the unidentified singer is said to possess a vocal style reminiscent of that one guy with the tight jeans.

Nondescript vocalist guy is currently in the studio with an in-demand hit producer and the engineer of several forgettably popular recent releases. The tepid - but commercially viable - debut album, with a cover photo of the dude standing in front of a weathered brick wall, is expected to be released in early summer.

This person's Opry debut will be on a bill with Mel Tillis and Montgomery Gentry as well as a high school glee club and a token bluegrass band.

At press time, a rumor was swirling that there may be a major announcement or invitation of some sort for this featureless, though quite fetching, country music singer when he takes the stage.