From Amtrak to The Misfits: How I Made it To Chicago 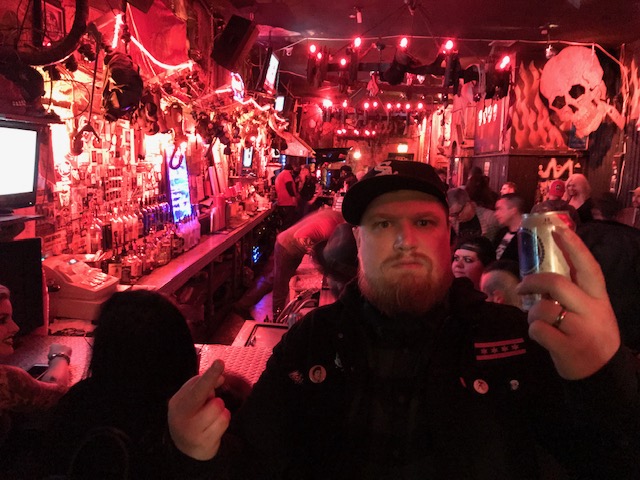 Chicago is a place with a lot of memories. It's the city where I was born, and where I'll always cite as home, no matter where I live. It's a complicated, working-class city that takes zero shit. Humble Midwestern town, Chicago ain't.

When the bat signal went into the sky that the Misfits were playing a show in Chicago, I went numb. They'd played two years prior at Riot Fest, but the impending birth of my second son, Luke prevented me from hopping on a plane to witness Glenn Danzig, Doyle and Jerry Only play together for the first time in forty years. Because our child was on his way, within a matter of days, I watched via live stream in Target. My fellow shoppers were not impressed with my shrieks of joy upon hearing "Skulls."

This time around, a Misfits ticket was my Christmas present.

Because I lucked out on a cheap flight home, I pulled a few freelance gigs out of the ether. Going up to Chicago from Austin, I took an extra day and booked a roomette on Amtrak. I'd fantasized about writing on a passenger train; I didn't know what to expect. 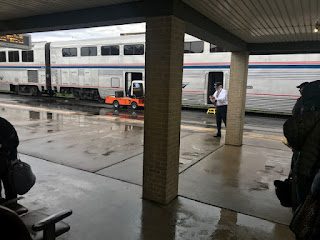 Amtrak is not what you think it is. It's ramshackle, a lot of weird, and the experience leaves you to think about the mortal coil. One thing I immediately learned: you're at the mercy of freight trains. I was five hours late getting to Chicago thanks to long haulers clogging up the tracks.

As the Texas Eagle pulled into the station, I was ushered into my room. While not the most up to date accommodations, the room was clean, and the porter was genuinely pleasant. Whatever millions Joe Biden secured for Amtrak, that cash hasn't funneled down to Texas.

Riding by train as you might expect is steeped in tradition rather than expectancy. It's not for anyone in a hurry, but instead, is meant to spend the time watching the American landscape whip by from a window while sipping coffee.

In the dining car I was seated with two older gals from somewhere up in the nether regions of Wisconsin. It’s a pleasant experience mixing it up with complete strangers, people you'd never met in any other circumstance. I had the burger and was surprised at the quality. 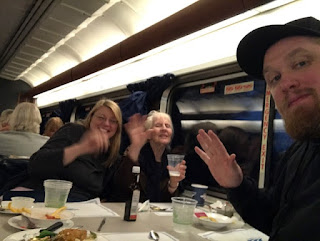 There's something romantic about a sweeping conversation with strangers about love, politics, and our future as collective when you've already forgotten the names of those you're riding with. It becomes less about the pretense of the subject matter and more about honesty. While a steady sound of Motown rocked the car back and forth, the meal was one of the most honest experiences I'd had recently.

Throughout the trip, I'd stumble my way to the observation car where people talked over hands of low stakes poker, old men chatted up anyone willing to sit down for a cup of joe, and I met an old trucker who told me I was 'cockblocking' him because I was reading and working, but the young stripper who'd just got out of jail wanted to talk to me about what I was reading. "I got my rubbers, and I'm gonna fuck, youngblood.”

I massaged his ego for serving in the infantry and finished my one beer. I gathered my books and laptop and split. Something about a guy who brings crackers and mini-bottles of gin for a train ride doesn't seem like the kind of dude you want to argue with over intention as you're inching somewhere in the middle of a murder dark Arkansas in the rain.

I met a lovely couple from Belgium, finishing their cross country odyssey through America, sampling our endless supply of meats covered in cheeses and salads topped with fried chicken. 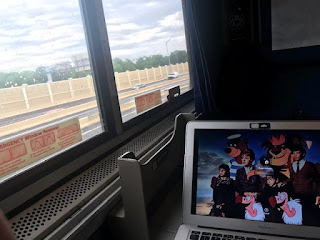 The more meals I took in with the dining staff, I was entertained by their lack of fucks. As soon as we broke past St. Louis and picked up new passengers with every stop toward Chicago, they grew less and less patient. Requests for tape, (does this look like Home Depot? Why would I have duct tape in a dining car?) or something free to drink (there's a little store full of chips, sandwiches and plenty to drink. If you're not sitting down for a meal, you can shop there for ten Cokes.) As a whole, though, the Texas Eagle staff were wonderful and accommodating, at least to me.

Waking up in my roomette, my anxiety was in full bloom, I missed my family. Laying there, watching a fog hover over craggy hills of nowhere, Missouri, I battled with existentialist, "what does life mean" moments. Dogs roamed property unchained, staying far from the muscle of the roaring train. People sat behind the wheel of rusted out Toyotas, annoyed they caught the train, but thankful our small convoy wasn't hauling freight. Reaching Union Station in Chicago hours late, I was happy to see the skyline.

Chicago was a hurricane. I had one healthy meal while visiting. In preparation for the Misfits, Preston, my best friend and our friend Ben from New Orleans ate with little scruples in regard to our well-being. We had sloppy beef sandwiches at Al's, hot dogs at Superdawg, along with pizza standing with our friends celebrating the opening of Rocket Tattoo. I chowed down on breaded steak sandwiches with my great aunt at Ricobene's. And I successfully avoided Malort.

We hit Rainbo in Wicker Park, witnessed the awful yuppification of one of my oldest watering holes, Tuman's. We downed cold ones with my editor Jacob in Bob Inn, listened to the classics at The Exit, and paid homage at the wondrous Old Town Ale House. If there's anything you need to know about Chicago, we appreciate a good tavern. 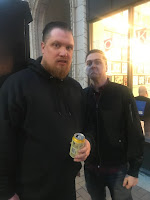 Pre-gaming around Wicker Park, we took the EL train to the venue out in Rosemont, but two stops away somewhere near Harlem Avenue, those tall Old Style's needed an exit strategy. Racing off the EL through the one-day "only in Chicago snow-cum-sleet" we ran to a Wendy's bathroom for a three-man race to the finish line pee in two toilets.

Because my brothers, friends, and other randoms were all in the house, we didn't go in till just before Fear took the stage. While I love Fear, Lee Ving and Co. didn't translate well into the room full of onlookers dressed in black, ready for one thing: to hear Glenn Danzig belt out the hits.

When the Misfits came out at 900 MPH, complete with Jerry Only coming from a fucking coffin, it was one of those few times in life that when you want something so bad, to see it actually deliver. It's was a transcendental moment, the songs I'd loved since I was a boy, hearing them, "20 Eyes", "Who Killed Marilyn" or "She" – I've still got the setlist saved in my phone. I was so happy with the performance, the vibe in the room, that it wasn't a bunch of corporate dudes there to drink beer and sit in the suites, I cried. I was that happy. 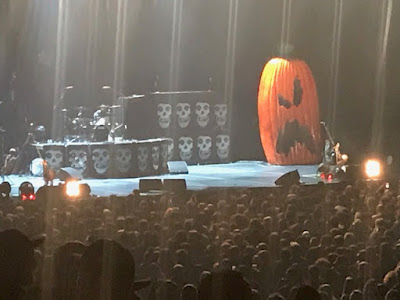 Relentlessly, the Misfits delivered. Danzig sounded a little beat up when he spoke to the crowd, like the throat pipe might burst, but as soon they counted off in their signature “1-2-3-4,” Danzig didn't miss a beat. It actually looked like he was enjoying himself, like sure, I'm making a fuckload of cash happy, but a legitimate joy that I hadn't seen in any of my times catching him previous.

Spending the $150 for the tickets felt like a fair exchange to hear all of my favorite songs in a row as the encore, including my all-timer, "Hybrid Moments," followed by "Attitude" and finally, "We Are 138."

I accidentally punched the guy next to me in the face, and Preston's glasses were knocked off and we spilled a few beers. Anything is possible when you're high on seeing Jerry Only do a bunch of power slides across the stage. I mean, those shin guards have to serve some kind of purpose, right?

Despite my utter joy and later elated drinking with my friends at the Exit, the significant moment of the trip came from the bond between myself, my brothers, and Preston.

My brother Brandon was tight on cash since finding out he was becoming a dad, Preston stepped in and bought him one, which facilitated him and his girlfriend Katie attending. That was a class move so he could be there with me and my other brother Bryan. 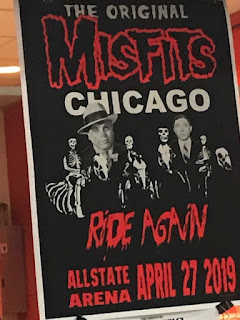 Bryan, like me, is a huge Misfits fan, we both have crimson ghost tattoos. When I rolled into the show, I had my eye on one of the posters. At $30 a pop, it was a pricey piece of memorabilia. I ponied up the cash and bought one, but immediately following found out, they had signed ones for a cool $100. Being that I was already on vacation, spending that extra $60 seemed like a bad idea. I went without. My brother and his wife Samantha knew how much the show meant to me and bought me the signed poster. When they gave it to me, I was touched by their act of kindness. They didn't have to do that. So, by accepting the gift, I gave my $30 unsigned poster to Brandon.

And now, sitting in my office, I have that poster framed on my wall. It's a reminder that while yes, I had the best time at the show, the bonds with my brothers are unbreakable, despite living across the country. Getting to share that experience with them and Preston and Ben will be a highlight at the end of my movie. A guy can only be so lucky, devil lock or not.

“In hybrid moments, give me a moment.”