Album Review / Luke Combs / What You See is What You Get 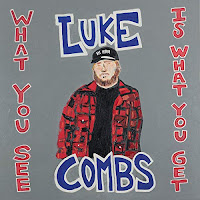 What You See is What You Get. It’s the perfect album title for this unassuming collection of songs and especially for Luke Combs, a guy who someone once told me looks like he could change your oil at Jiffy Lube and whom you actually believe when he sings about drinking beer and fishing. It’s this difference which sets Combs apart from so many mainstream artists; it’s neither completely disingenuous, like Luke Bryan in skinny jeans singing about dirt roads and moonlight, nor a calculated marketing strategy to establish country cred, the obstacle barring so many people from getting onboard with Midland despite the quality of their music. However you view authenticity, Luke Combs has shown that it matters, and shows, and isn’t always about fiddle or steel or even deep lyrics, but more about being true to yourself.

The great thing is that Combs staying true to himself results in a very country record, not some 70’s throwback affair, but a great example of how traditionalism can move forward and still exist in modern country. This is exactly what you want in the mainstream, and the numbers have shown that the general public still wants this as well. Sonically, this is what the evolution of country music should mean. There are a couple of moments of overproduction, but most of this is decisively country, and injected with the energy that you don’t always find on independent records.

Lyrically, there’s nearly always enough substance to further separate Combs from the crowd and hold the attention of the listener. The hooks are smart, and the songwriting is strong, offering simplicity without losing the substance. Songs like “Even Though I’m Leaving” and “Refrigerator Door” even go deeper, providing something meaningful and yet still relatable to a wide audience. “Dear Today” is the hidden gem here, with its thoughtful perspective and gentle warning not to take tomorrow for granted. On a 17-song record, there will always be filler, and this is no exception, but the filler is just that as opposed to what we often see on mainstream albums, where an otherwise good record is hindered by one or two terrible missteps. This could have been trimmed, but it is solid throughout.

Regardless of your personal stance on Luke Combs, the most important factor concerning him and What You See is What You Get is the influence on the genre as a whole. There will be staunch traditionalists and independent fans who never give Combs even a passing glance simply because he comes from Music Row. But Music Row is where the future of country music either lives or dies, where the artists and albums that define country music for generations originate, and where the torch for country music is passed down to its listeners. And with Luke Combs carrying that torch, the sound of our beloved country music is country, the lyrics are substantive, and the artistry is real. If Combs is the future of country music, then the future is indeed beginning to look brighter.