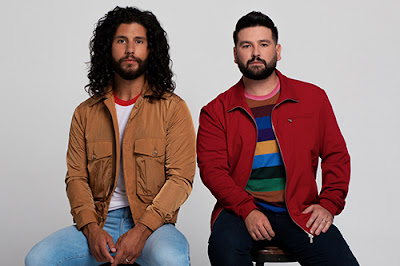 Several readers of the headline above today learned that superstar country (pop) duo Dan + Shay is, in fact, composed of two male singers. Before having their eyes come upon those thirteen words, those readers, who may still be reading these sentences I am typing, believed that Shay was a woman.

The reasons for their assumptions are varied and understandable. First, “Shay” is generally recognized to be a name for females and possibly those who identify as females. Secondly, the vocal presentation of Dan + Shay is rather high pitched. Women of the human species usually have shorter, thinner vocal cords, causing the sound produced in the larynx and uttered through the mouth to be in the upper register.

Thirdly, those readers, usually not fans of pop country music, may have glanced quickly at promotional photos of Dan + Shay and noticed that one of the members of the duo has long hair (and occasionally no facial hair) and vaguely noted mentally that one of them was female. This is not the case. That misjudged member of the duo is named Dan, which is generally recognized to be a name for males and possibly those who identify as males.

Those newly-informed readers who are still perusing these paragraphs may be surprised to learn, additionally, that Shay is the always-bearded member of the platinum-selling, ACM Award winning musical act. Indeed, Shay is the lead vocalist of the group, but in fact possesses the attributes that identify Mooney as a male, though if that definition has changed as of the posting of this story, I apologize to anyone I may have offended and will attempt to better myself.

“Huh, you learn something every day,” said Jackson Smith of Houston, upon coming to the realization that Shay Mooney is not a woman. “But they still suck.” Smith also posted a politically incorrect comment about the duo’s sexuality below the Facebook link for this very story. It was hidden or deleted promptly.

Shay Mooney, upon finding out that many music fans assumed him to be a her, stated “I don’t care, I’m rich.”