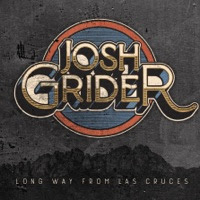 By Travis Erwin
Las Cruces sits less than thirty miles from Texas in the far South, Central part of New Mexico. Josh Grider hails from Las Cruces and the city, as well as his personal journey is at the heart of his new album, Long Way From Las Cruces. Now firmly rooted as one of the Texas music scenes most talented songwriters, Grider is almost the Jack Johnson of Texas music. Offering heartfelt lyrics that rely on softer emotions and tender observations, he doesn’t need to roll around in beer and smoke or flaunt his Texan-ness to try and be authentic. Grider simply opens his heart and soul and shares what’s inside and brings his music to life with genuine believability. This album, like his career speaks softly but deliberately and for me Grider is the poetic country voice the world needs more of.

His delivery often reminds me of classic George Strait, except Grider is a far stronger songwriter. Relying on the creation of his own words more than his ability to find great songs to sing, Grider offers an emotional vulnerability that adds an extra depth to his work. I’ve had the pleasure of catching an intimate Grider show and hearing him talk about his music and perform it in a way that makes you the listener feel as if you too lived it.

In many cases we have indeed lived it, because the writing is often universal, but the opening and title track of this album is more about Grider sharing his own journey than his attempt at uncovering broader truths. The swinging track, “Long Way From Las Cruces,” is a thank you to the life Grider’s been able to enjoy, thanks to his talents and those of us who appreciate them.

“Thank God It's Raining” is the type of track that brings those soft engaging emotions out all the more. Smooth and tranquil in ways many musicians run from while trying to entertain the masses, Grider is able to rely on simply and true emotions to keep you on the hook rather than false party narratives that rely more on commotion than emotion to sell the words.

To that end, “Life's A Party” offers a contradictory feeling that truly makes you stop and think. Given the title, you expect a more raucous arrangement and vibe, but Grider takes a reflective look on that phrase. The vocals on this track certainly have a Strait edge to them, but the twist of a tired old refrain is what makes this track work.

The slow almost melancholy run continues with “Can You Feel Me Missing You” and again Grider is a master at making you feel the emotion behind his words with an emotive delivery. This track did not quite hook me as well as the others on this album, but so much of music depends where the listener is in their own life so I have no doubt this track will speak more strongly for others than it did me at this time.

Much of this album owes a nod to the 90s, back when Mainstream Country still had some soul and genuine emotion. “Two Truths And A Lie” certainly feels like a throwback to that era and yet, it doesn’t feel dated or out of step with contemporary ideals and thoughts. This makes it a strong almost timeless track that simply feels like the internal struggle we’ve all faced after a tough breakup.

Grider shrugs off the sadness with a more up-tempo track about appreciating life. Despite the shift in energy, “Wanting What You Get” is not a party song, but a gratitude song about simply taking the time to enjoy life as it comes rather than fixating on all the things that haven’t gone as planned.

We live in a world full of conspiracies and way-out-there ideas that seem to have no logical basis. Love has always been just as outlandish, and “I Know I Love You” plays with the comparison of trusting something you can feel, without truly seeing or knowing in the same way we know other things for certain.

The overall arc of Long Way From Las Cruces is one of discovery, admittance, and perhaps resolve as you accept life as it comes. We all tend to fight the current and try hard to hold on to the ideas and goals that are perhaps beyond their expiration date. No, life doesn’t follow the path any of us lays out along the way, but the truly happy and content recognize and adjust as detours come their way. The final track, “Boots On My Feet” really bring that point and this album home.

Grider’s latest collection bucks the norms of most popular music that relies heavily on raucous feel-good vibes. Long Way From Las Cruces instead offers beauty and truth grounded in reality. This is no easy feat as, we often look to escape reality when being entertained, but Grider took a different approach by sharing his own experiences and takes on life. Much of the album was written in the build toward Grider’s 40th birthday, and the album certainly has this wise reawakening feel that we all go through as we adjust to what life is rather than what we once thought it might be.

Maybe Long Way From Las Cruces is less about entertaining and more about enlightening, but in the end, the album and Josh Grider manages to accomplish both.

Long Way From Las Cruces is available today most everywhere you purchase or stream music.