Album Review / The Damn Quails / Clouding Up Your City 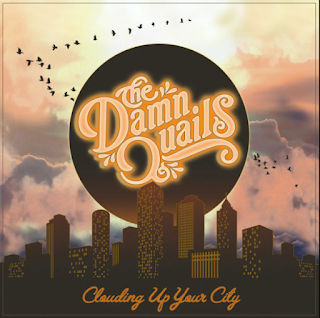 Almost exactly six years after The Damn Quails announced their indefinite hiatus in June 2016, leaving a hole in the Texas/Red Dirt scene and breaking the hearts of countless fans, they are once again making music. Their triumphant return comes in the form of the new album Clouding up Your City, originally marketed to be a Bryon White solo project but now proudly carrying the name of the Oklahoma-based band. With stories of heartbreak and life on the road and the overarching narrative of White’s own struggles with addiction, which culminated in a stint in rehab during the group’s hiatus, the new record is a welcome return to form for the band and a great showcase of the unique flavor that The Damn Quails bring to the Red Dirt scene.

The themes of battling demons and working to overcome addiction are certainly central to this record. White remarks on “Harm’s Way” that indeed, he might always stay in such a predicament. He laments the fact that the liquor is always on the “highest shelf” on the track of the same name, and almost ruefully reflects that he will continue to imbibe despite the bitter taste and negative consequences. This kind of wry self-deprecation is evident in the title track as well, as White sings about “clouding up your city with our sin.” He comments bitterly and sarcastically on “Everything is Fine” about the perplexing human tendency to echo this platitude when, in reality, our lives are crumbling around us. Perhaps all these sentiments are most succinctly summed up on “Mile by Mile,” wherein White announces, “I hung up my demons, they’re dry on the line, I just never could quite throw them out.” He seems to be accepting the fact that, although he may have overcome his struggles, addiction will always be a part of what has shaped his story and these songs.

Perhaps this is why, on a record so brooding in its thoughts, the production of John Calvin Abney is the album’s true ace in the hole. Abney’s production and the live feel of the project come together to add a warm, welcoming quality to these tracks that belies the often darker tone of the lyrics. White states, of the Quails, “We might be the least country band to ever break out in Texas,” and, while that point can certainly be argued, the truth is that this record does not really align itself with any genre. On the more upbeat selections, like “Someone Else’s city,” one might be tempted to classify this album as heartland rock or Americana. The country influence is certainly there in places also, such as in the hauntingly beautiful harmonica that explodes into prominence in the middle of “Highest Shelf.” The piano playing of Abney delivers a classical elegance to tracks like “”Harm’s Way” and “Mile by Mile.” And then there’s the unique vocal phrasing of Bryon White himself, which adds a definite, and incredibly charming, Celtic flavor to the whole thing. Clouding up Your City is, most accurately, a Damn Quails record, for no other band, in Texas or otherwise, possesses a sound quite like this, and John Calvin Abney was the perfect choice for a producer to bring out and accentuate these strengths.

Clouding up Your City is an album of triumph, both in the overcoming of the struggles of life and in the return of a band plagued by all manner of hardships. There is something intangible and infectious in these songs and in this narrative as a whole that renders the record both captivating and accessible. But more than that, this album is an excellent case for why The Damn Quails are special, and why the Red dirt scene certainly feels more complete now that they have returned to it.

Cody Jinks, Gabe Marshall, and Bryon White Perform "We Get By"