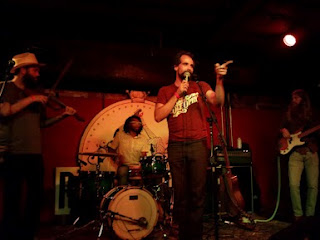 Seeing Jonny play is something of a spectacle.  Is it serious music?  Is he laughing at the characters in his songs?  Or, merely relaying mundane stories his characters go through in the most sincere way possible?  It would be hard to argue with the last ponder.  I mean, when you hear the character in "Chevy Beretta" you know that you have met that guy.  You have hated that cocky SOB.  But, there was also something about him that endeared you to him.  And it's that precise feelings-at-odds sensation that makes Jonny's music so memorable.

This was the 3rd time in the past year I had seen Jonny.  While I could sense a little road weariness in Jonny's demeanor and banter, I still thought he put on a better show than many musicians- i.e., as much as I love James McMurtry, his frontman skills are slightly lacking. 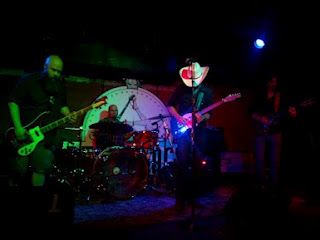 The show began with a D.C. native Jonny Grave and the Tombstones. Jonny Grave played loud, raucous blues in the style of R.L. Burnside meets Jon Spencer Blues Explosion (think Ass Pocket of Whiskey).  It's very difficult to play this style of music and not have the audience pretty enthralled and dancing.  That's exactly what was happening as the set progressed.  Also, Jonny Grave is quite the front man playing with a chip on his shoulder.  If you don't know Jonny Grave already, I think it's worth your time to look him up and see what you think (here).

Next was Jonny Corndawg (for the time being).  Bringing with him his backing band (The Almond Brothers Band), Jonny played all of the crowd favorites including "Exercise," "Middle Brother," "Shut Up," and "Silver Panty Liners" just to name a few.  Every song, however comical it may be, was played with utter seriousness and sincerity.  Is that to say that Jonny takes himself too seriously?  No, not at all.  But, he believes in the songs that he writes and the characters they portray.

Half way through the set, he made an announcement.  That announcement being that he would no longer be going by the name "Jonny Corndawg" but would instead be going by his real name, "Jonny Fritz."  I believe this is probably a smart move towards gaining more serious attention.  His songwriting is top notch and this change will likely get him more attention from those who might be put off by a country singer named Jonny Corndawg with an album titled "Down on the Bikini Line." 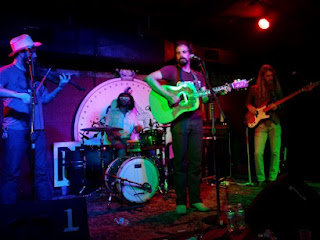 As I said earlier, Jonny seemed a little road weary, but it did not detract from the show much at all.  It's hard to go into one of his shows and not come out in a very good mood.  It's fun to see musicians have fun and engage the crowd.  The band had fun.  They are a tight-knit country band and I'm excited for future shows and albums.

Go see Jonny Fritz when he comes through your town.  Go buy his albums.  Give them a listen.  Laugh if you want, that's alright.  There's a lot of humor in the absurd situations that go on day in and day out of our lives.  You have to laugh at them.  As the old Leadbelly lyric goes, "you see me laughin', Lord I'm laughin' just to keep from cryin'."

I have to think that Jonny's characters might feel the same way.  Or, they don't.  And, I guess that's the beauty of interpretation.
The latest nonsense from Farcer at 3:30 PM 0 complaints