Jay Buchanan may be the best vocalist in rock music. Wow. 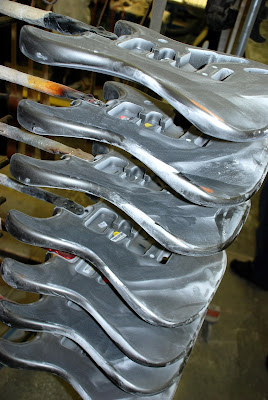 On the eve of the release of the new Queens of The Stone Age record, someone in the band mentioned that “guitars were going extinct”. Wait, what?

Is the symbol of a mindset, culture, a musical movement going to be relegated to the history books? Are we doomed to endless supplies of shitty music made with computers? Existential questions abounded.

When Elvis Presley started drying humping a mic stand with his long, greasy hair, no one had seen something like that in mainstream culture. While yes, Presley’s theatrics were a milquetoast reflection of his black counterparts out on the Chitlin Circuit; Presley was the guy who put ass wiggling at the top of the news hour.

After Elvis, the floodgates opened up. You had The Beatles, The Rolling Stones, Led Zeppelin, The Who, Black Sabbath, Jimi Hendrix, Cream, etc. And those bands begat other generations of rock and rollers, along with subsets of music like punk, heavy metal, hard rock, and whatever Steely Dan played. However, the underpinning idea here was simple: because of that initial wave of bands, guitars and rock and roll was the predominant art form.

Back in the day, you had few social choices: dig on music or play sports. Everything else was all sub-genre and had nowhere the social pull like strapping on a Les Paul or tossing a tight spiral. But no matter the scene, the music was the great equalizer. Despite different worlds, those jocks were listening to the same stuff as the long hairs.

Because of the limited choices for popular music the same bands got gigantic. Radio was controlled with an iron fist. Record labels and station managers had mafia-like relationships, and only certain groups got the nod to move to stardom. Bands were so big they were playing venues meant to land aircraft carriers. Dudes in Led Zeppelin were renting whole hotels and banging chicks with fishes.

Then technology started to evolve. Hip Hop came onto the scene, which challenged rock and roll as an art, not only in style but also in purity. Country music was moving away from a Willie Nelson driven tenor but more poppy and accessible.

Throughout the 1980’s, bands were adopting machines, keyboards, and synthesizers. MTV appeared and soon, symbolism and identity were as much of the package than just the riffs.

The medium of the video was a step toward today’s market. The 1990’s was the last pure decade for rock and roll. Maybe the early 2000’s, but this new thing, this new addition to the musical landscape, tainted that: computers.

So while in the past, rock and roll or whatever one of its descendants had the larger stage, now it’s just a slice of the contemporary pie. We only had the radio. Then MTV opened that up. And then we got access to broadband. And then the computers themselves could make music. Everything had changed.

Every interest of every type has a meetup or a scene. You can be an adult man and into a children’s cartoon about ponies and you have a community you can cling to.  Whereas in the past, you had one of those two choices music or sports as a blanket community – today, you can find a crew into a Finnish flute music.

But, those articles, they keep saying rock and roll is dead. That kids only listen to hip hop or electronic music. People speak to the rise of the rapper or the huge dj. For every Kendrick Lamar, there’s a bazillion wack rappers who’ll have one hit and fade RE: Chingy or Migos. The rap game might have a few legit superstars, but even their world some thirty years later almost mirrors that of rock and roll with the 2000’s acting as their 1980’s excess.

The electronic music world stands on the merit of the experience: it’s people on drugs dancing around to predictable beats staring at flashing lights. How is anyone surprised this makes money? People love drugs. We’ve been getting high since the jump. There’s no substance to electronic music.

In twenty years no one will listen to the Chainsmokers. You can bet kids will definitely want to learn about Kurt Cobain, though.

Rock and Roll isn’t dead. The music just no longer has the iron grip in a world that’s textured and with so many options. It’s not that there’s a lesser place in society for this music, it’s simply that those arena's are not filled with really anyone except ultra pop mavens. Why? Because those pop acts aren’t dangerous, they’re brands that you can slap a cool outfit on and sell products to. There’s no rock radio anymore. Everything that’s moving across traditional airwaves is so out of touch, and we all know it.

Because as its own ecosystem it doesn’t need to evolve musically – there’s no point.  But, what the music does need to do is embrace all of the technology and trends of today and realize this how it is. Before a record was released and it was gospel thanks to a handful of channels; today you can stream an album on Facebook with no warning.

We, as listeners need to accept the fate of all kinds of music: there’s a ton out there and it’s our job to support acts we’re passionate about. The new bands need their shot, but it needs to happen on the backs of the people who are passionate about the art.

Violent Soho, JD McPherson, Rival Sons, Frank Carter and The Rattlesnakes - these acts and more are all out there writing killer tunes. Just do the homework. We need to look past those days of lore. They’ll never exist again. Socially, no one is gonna get banged with a fish without Instagramming it first.

Rock band Rival Sons has a new album coming out tomorrow entitled Hollow Bones.  It's very good. This song it on it.

From their forthcoming album (this coming Tuesday), Great Western Valkyrie, here are Rival Sons with the video for "Open My Eyes." RIYL: The Black Keys, Jack White, Queens of the Stone Age, The Black Crowes.