No Future: A non-punker’s review of Pistol on FX* 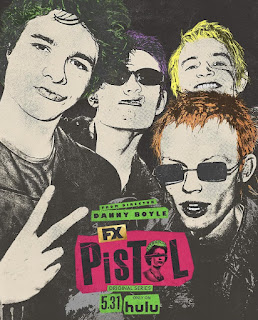 London, 1975. That’s where and when the punk rock movement really got its groove on, at least in the minds of the suits at FX. (*asterisk: It’s an FX production, but available only on HULU… which is a bit of a rip-off in principle, since I had to re-up my Hulu subscription to watch this pretty good docudrama.) It’s a decent, if (probably) apocryphal account of the shooting-star history of the Sex Pistols, whom many people with shitty taste consider an “important” band.

Let’s do a couple of disclosures: 1. I’m not a punk rock guy. It took very little talent – indeed, less than marginal talent – to have a “good” punk band, especially 45 years ago. That was my impression going into this limited series, and it was only confirmed therein. The band – and their fans – acknowledged that they sucked as musicians. 2. I only care about punk rock to the degree it influenced 30 years’ worth of alt country bands. Johnny Ramone knew about five chords, which is two more than Sex Pistols “guitarist” Steve Jones ever knew. And nobody in the Ramones, or Sex Pistols – or even the Clash, which had actual talent – was as good a musician as anyone in Uncle Tupelo, Whiskeytown, Lucero, or Blue Mountain.

The general story of Pistol is based on Jones’s memoir, which kinda makes everything suspect; he’s portrayed as illiterate in the series. So, his memoir is probably more of an oral history. It doesn’t make a ton of sense, otherwise.

Jones can’t read, but he can steal. And in trying to boost some exotic clothes from an exotic store, he runs afoul of an ex-pat American chick. Her name’s Chrissie*, and she’s from Ohio. (She’ll go *back* there one day and be *amazed* that the *farms* have *been replaced by shopping malls*.) Y’all can figure this spoiler out, right?

The store’s owner is a bon vivant named Malcom McLaren. He’s a faux-Marxist revolutionary – he doesn’t mind turning a profit on pervy clothing – who wants a band to spread his hypocritical version of chaos.

And he doesn’t give a shit that Jones can’t sing – that was Steve’s original vision: being the next David Bowie (LOL.) He gives him a nice, white Les Paul that allegedly belonged to a member of the New York Dolls, while simultaneously recruiting a similarly untalented freak as a “vocalist,” Johnny Rotten.

Objective viewers might be shocked that everybody, throughout this story, acknowledges that the band has very little talent. Seriously, the consensus is that they suck ass. There’s a strong suggestion that McLaren just wanted to orchestrate something in keeping with his Marxist/anarchist ideal…then pulled the plug when they became too “rock ‘n’ roll.” The best musician, bassist [his name doesn’t matter, does it?] was run off at Rotten’s and McLaren’s insistence and replaced by Sid Vicious who (wait for it) didn’t know how to play the bass.

A few months later, Sid said goodbye to his handpicked version of Yoko Ono by stabbing her in the guts multiple times until she bled out, then O.D.’d when out on bail. And there went the Sex Pistols. What a cool “punk rock” ending, huh?

They were a shit band who couldn’t play worth a damn. They lasted all of two years and change. And yet, they’re some kind of iconic “band?” Whatever.

Truth: Rotten wrote a couple of decent songs. But they were essentially an overrated joke. They made one album. Best part of the series: Seeing a hot version of Chrissie *Hynde in some decent sex scenes. And, in truth, it’s a decent portrayal of a short period in rock ‘n’ roll history.

It was interesting to me in the same way a book on the “Know Nothing” Party of the 1840’s U.S. is to me: Mildly compelling in that particular moment, with several instances of “Dang, I didn’t realize that.” But, far less relevant than conventional wisdom, in terms of the history of rock music.

It really is worth the watch, if you have the time.

But the Sex Pistols were and are a shit band. 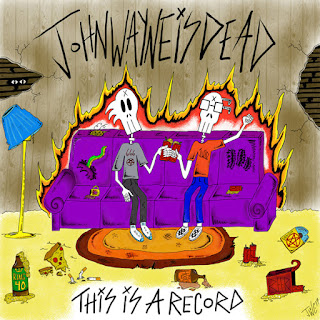 If you’re craving lo-fi punk that’s screaming with early 90’s garage overtones with splashes of rockabilly grooves, Johnwayneisdead’s new record, This Is A Record will satisfy thirst like a 36 oz. PBR.

Based out of Houston, Johnwayneisdead is a punk duo that’s churning out rebellious, chaotic tunes that aren’t lacking in the fun department. While a lot of the time it’s easy to wax poetic on the meaning and lyrical content or pause, wondering what’s it all mean, Johnwayneisdead’s This Is A Record gives the finger to all of that. True punk rock isn’t rocket science; it’s two guys hammering out songs for beer money and a bag of good kush – that’s it, plain and simple.

Lately, it feels like music has to be soaked with triple meanings and with backstories, stuffed details that need a field guide to understand the context, This Is A Record doesn’t - it’s fast, catchy and to the point. There’s no wack interludes or songs that come off as confusing or like they needed to be left off the record, but instead, everything cruises with the same frantic pace.

“Joey Lawrence”, “Buddy Holly”, and “Vampire Breath”, all of these songs ooze with a sentiment of the old school punk we used to pull out of distro boxes at shows or local record shops. Despite the music slapping, I feel bad for Johnwayeisdead because of the era they exist within. Yeah, they can reach the world with a click thanks to the Interwebz, but had these guys been in the game twenty-five years back, we’d be talking about them with the same reverence as bands like The Queers, The Bollweevils, The Descendants, 88 Fingers Louie, and even Naked Raygun. The DNA is there and if “Joey Lawrence” isn’t a bonafide, beer-spilling, sing-along, meet me out by the dumpsters.

The riffs, the slapstick, fuck you attitude is honest, and it’s not a dollar store copy. These dudes live and die by the show and the world that comes with being a punk rocker in the south, and at a time when kids today think computers are instruments.

Grab a vinyl of This Is A Record and support these dudes, because if you’re into punk that brings back the good ole days, Johnwayneisdead delivers in spades.


or stream at Spotify: https://open.spotify.com/album/2InQr48IbuvBNCMc2COswR
The latest nonsense from Farcer at 10:30 AM 0 complaints 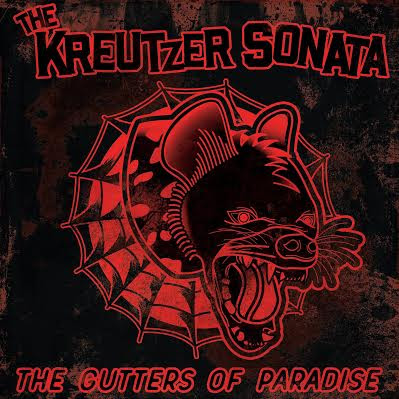 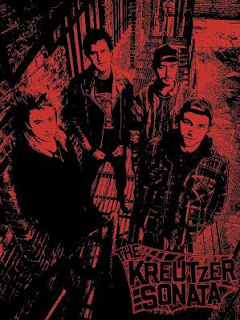