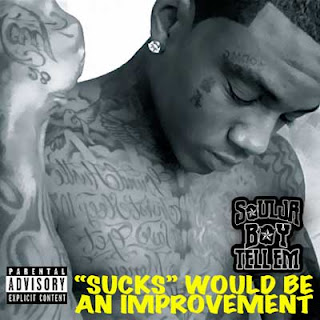 Hold up h8ters (jelous a bit??)
(5 Stars)
Ok this new album Dre is gonna nail it big time he has listend to you haters and now he's rapping buy this now I say 2milli is gonna kill everyone of y'all next single that's gonna come out is "do it big" kills everything on this track too so shut the F** up about he's not a rapper go hug a tree or sumthin cus this is 2010 right here and he's killing it. From were he came from crank that soulja boy to this it's pretty Much beast right here people!! BUY IT
-CelticsGoinALLThaWAY

haters-_-
(5 Stars)
all you haters should be ashamed of yourself. If you don't like it go listen to something else you racist no lifes!!! Go put in a gay rock album or something. leave soulja boy alone u make me sick.

PRETTY BOY SWAG is a good song if you don't like it don't click on it and waste valuable time trying to generate negative energy. no life racist.
-SODMG, Inc.

OMG SOULJA BOY OMGOMGOMG no
(1 Star)
this song is garbage. Sorry for being so nice about it, too. His 'flow' is essentially like a speech disorder which hinders him from making any sense whatsoever.
-Salstheman

My Take:
Listen here (if you dare): http://www.youtube.com/watch?v=h8growuncz0
Before I'm called out as unqualified to review a rap song, while it's true I've never officially reviewed a hip-hop song, I'm a fan of good hip-hop. I like Jay-Z, K'naan, Nas, Game, old Snoop, OutKast, Mos Def, Dr. Dre, Beastie Boys, Public Enemy, 2Pac, Run DMC, Nappy Roots, Eminem, Tech 9ne, Krizz Kaliko, Ice Cube, Notorious BIG, Jedi Mind Tricks, Common, NWA, Eazy E, Cypress Hill and countless others. I think that makes me as qualified as anybody else without a job at Vibe, a music history or journalism degree. On to the review.
-------------

This alleged rap song begins with breaking glass then a ring tone-ish beep. That's par for the course with Soulja Boy, who is frequently called a ring-tone rapper by his haters. He goes to great lengths to prove them right with this hook-less drone of a hip-hop track that should have been left on the cutting room floor of even the most quickly tossed off mixtape. The "chorus" (which eats up a good 75% of the song) is an overly repetitive breathy recitation of self aggrandizement entirely lacking of memorable rhymes or even the scant shred of artistic worth. The beat would make Al Gore very happy though, it's recycled, and the beat it recycles is also recycled ∞.

There's nary a line in the song that elicits even the presumption that, one day, Mr. Tell'em might turn a clever phrase. He's got swag, girls are on his dick, they scream his name. Yep. For the explicit version, he curses at the calculated moments that can easily be scrubbed from the radio version. Dre (his name, and the name of his forthcoming million-selling drink coaster) is a product, plain and simple. He has a cult following of teen girls, disaffected suburban youth (read: whangstas) and possibly a few people with actual street cred who follow his Tweets with disturbing stalkerishness. He runs a veritable empire with his gaming website and all the merchandise related to him and his SODMG organization. Apparently, he's a good businessman or hype man. He is not a good rapper.

I'll bite a phrase from one of the iTunes reviewers: "His 'flow' is essentially like a speech disorder." That's not h8er hyperbole. Soulja Boy rides the rhythms like Willie Nelson on a weed bender. And his voice: nearly any drunk guy at the club or the karaoke bar this weekend could easily replicate this flow. Seriously. How he got into the "rap game" is beyond me. I won't say I could rap better - I have the rhythm of a blogger - but I bet most of you could. Seriously.

The latest nonsense from Trailer at 4:00 PM