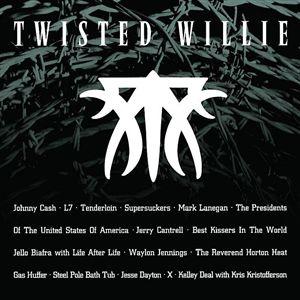 After a few poorly written meanderings on the relative merits of various recently released albums, I felt like it was a good time to take a step back and provide a poorly written, rambling review of a couple of albums that were formative in my musical journey.  So without further ado here is the first of however many of these Trailer will let me write.

In the early to mid 1990's alternative music was exploding worldwide.  Of course the Seattle scene was huge with bands like Nirvana, Pearl Jam, Soundgarden and Alice In Chains making music that seismically altered the landscape of rock radio.  Austin, TX, long a hotbed for the "weird" was also playing a major role in the alternative rock scene, along with such locations as San Francisco and New York.  Along about 1994 someone (I'm not sure who and am a bit too lazy to do the research to find out) had the brilliant idea to combine some of the brightest lights of the alternative rock scene with a handful of Willie Nelson tunes for a project that would become Twisted Willie.  This album was a seminal point in my discovery of music.  I discovered The Presidents Of The United States and the Supersuckers through this album, along with rediscovering just how cool Willie's music was and heard what I believe to be the beginning of the third act of Johnny Cash's career.  It's not a perfect album, every song doesn't work, but the overall product is well worth hearing (or rediscovering if you haven't heard it in a while.)

The album opens with Johnny Cash (backed by Alice in Chains in one of their last recordings before Layne Stayley's death) covering Time of the Preacher.  The song gives a glance at what Cash would later create with Rick Rubin. Another highlight is Jerry Cantrell's haunting solo performance of I've Seen All Of This World I Care To See. Supersuckers' cover of Bloody Mary Morning is another great entry on the album.  This song seems to have been written for a more punk styled interpretation, and that's exactly what it gets.

Jello Biafra covers Still Is Still Moving To Me, and knocks it out of the park.

My personal favorite on the album is The Presidents Of The United States hyper, desperate sounding cover of Devil In A Sleeping Bag.  To this day I often find myself playing this cut on repeat.

Jesse Dayton absolutely kills Sad Songs And Waltzes, before Waylon adds his inimitable stylings  to I Never Cared For You.

The album closes with a haunting version of Angel Flying Too Close To The Ground by Kelly Deal.

While there are some tracks that don't hold up to the overall standard, particularly X on Home Motel, overall it's an older album well worth a listen that has held up well over the nearly 20 years since it's release and is well worth the purchase price on iTunes.  So give it a listen whether you're a fan of old school alt-rock or Willie Nelson.  If nothing else it proves what an incredibly strong song writer Willie Nelson is, a fact that occasionally gets lost in Beer For My Horses type dreck.

Purchase Twisted Willie here or here.
The latest nonsense from Trailer at 2:00 PM