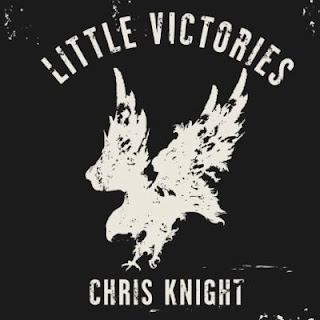 If you're already a Chris Knight fan (and you should be), you've come to expect certain things from one of his albums. Gritty honesty. Earle-meets-Mellencamp country tinged roots-rock. Melodies that stick in your head for weeks. A focus on rural hardship. Lots of murder. Well, Little Victories has all of those things minus one. Going on 15 listens, I don't believe I've noticed more than one loss of life.

Don't worry, Chris is good enough that he doesn't have to let the lead fly every time out to deliver a satisfying collection of songs. While previous releases have seen foiled robberies, abusive jerks gone missing and bodies dumped in the river, the central bloodshed on Little Victories is the steady trickle of dead Presidents from your wallet. The commercial music world is keeping things typically light with trucks and girls and beer, but Knight sets his sights squarely on the difficulties of life in an endless damned recession.

"In the Mean Time" leads off the album with a treatise on self-reliance. Knight warns that as bad as it is, you should prepare for worse. "You might have to go out and shoot something and drag it home" and that might not be the only reason you need a shotgun.

Later, one of my favorites on the album, "Nothing On Me" chronicles the scars of a man and his dog who've already been made ready for hard times by hard living. A sawing fiddle and ringing guitar accompany Knight as he puts a more personal spin on the message of the album opener.

The title track sees Knight trade verses with John Prine in a song that celebrates the small successes that help get a person through struggles. Deer in the freezer and a baloney sandwich for lunch might not sound like much, but sometimes that's all it takes to keep the dark clouds at bay.

"You Can't Trust No One" is the darkly humorous flip-side of so many 60s love and peace anthems. Knight confronts the well-meaning ideals of community with the reality that some people are always ready to take advantage of such trust. "Everybody pack your picnic lunch and everybody pack your gun" is the hard truth he bears.

Little Victories isn't a concept album by any means, so there are plenty of Knight's trademark stories, drifter anthems and lost love laments. "Low Down Ramblin' Blues" is a catchy mid-tempo ode to never letting your hat hang in one place for long. Long-time fans will recognize "Hard Edges" from the Trailer Tapes collection. This time it's a fleshed out, full-band effort that while still more than solid, loses a bit of its raw impact.

So, how does Little Victories rank among Knight's stellar string of releases? Honestly, I don't know. He hasn't put out a single album I'd take a pass on yet, so if this one's in right there in the pack, it's in excellent company. Consistency is one of Chris' strengths and this is an album any Knight fan will love. It's also just as good a place to start as anything else he's put out, if you've never heard his music. Knight is one of America's greatest living singer-songwriters and Little Victories only adds to his legacy …even without the high body-count.

Little Victories is available on iTunes, Amazon, Lone Star Music and other outlets.
The latest nonsense from Trailer at 9:00 AM