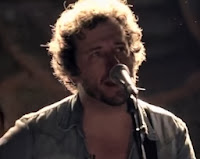 Um, okay. You guys complain about MY FAVORITE SINGERS copying each other and singing about trucks and babes all the time. Hypocrites much? This Hog guy just straight-up stole a song from those Chevy ads that are running during my dad's football games. And did you hear what I said?…a Chevy commercial! So, your darling "authentic" singer-songwriter guy with his perfectly messed-up hair, puppy dog eyes and rarely shaven face has stolen a song from a truck ad!!! How jacked up is that??? You people never shut up about Jason Aldean and Luke Bryan singing about tailgates and country hotties (like me, LOL!). Now, maybe you'll shut your fat, jealous mouths about it! Even this old dude (he's old enough to have been my dad even without appearing on one of those trashy MTV shows my mom loves!) knows where the cash is. Now, the song… is it good? It's okay. It's a little too serious for me to take serious, but his voice isn't too bad. He's no HUNTER HUNTER HUNTER HUNTER(!), but he gets the job done. I just have to go back to the fact that this fellow had enough "huevos" to just watch TV until he heard a song he liked, and then re-record it and put it out to the radio!!! I mean, he didn't even sing it a little differently. This is way worse than Aldean stealing those songs from Brantley Gilbert. I hope Chevy takes your booty to court, Mr. Hog!

For his voice not sucking, I'll give this:
1 Heart Hand!