It's been a while since I've written up any shows I've been to, and in the time that has past I've been to quite a few.  However, I just didn't think they were worth writing about.  Not because they weren't good enough.  Maybe I just hit a lull in writing, or maybe I felt like things got just a little bit blurry near the end of the show.  So, I put off writing anything.  Until, now.  I come back to you guns blazing with a review of one of the best shows I've been a part of in the past 2-3 years.

There are few things in this world better than a show on a Friday night.  The release of all emotions that comes with a great show.  The suspension of anything that is happening in your life.  And, of course, the pure joy of being with 1200+ (in the case of a 9:30 Club show) of your newest friends.

This was absolutely the case on Friday April 25th, 2014 at 9:30 Club when Alabama Shakes made their triumphant return to 9:30 Club and D.C.  I believe the last time they were in D.C. was in 2012 with the Drive-By Truckers.  And shortly after that, they headlined the Rams Head stage in Baltimore with a band opening for them I had never heard of- Lee Bains III & the Glory Fires.  I happened to be at that show, and both bands shook me, albeit in different ways.  So, when I found out that this same line-up would be coming back to D.C., I (im)patiently waited for the tickets to go on sale on the 9:30 Club website and got secured my spot to a show that sold-out in 5 minutes. 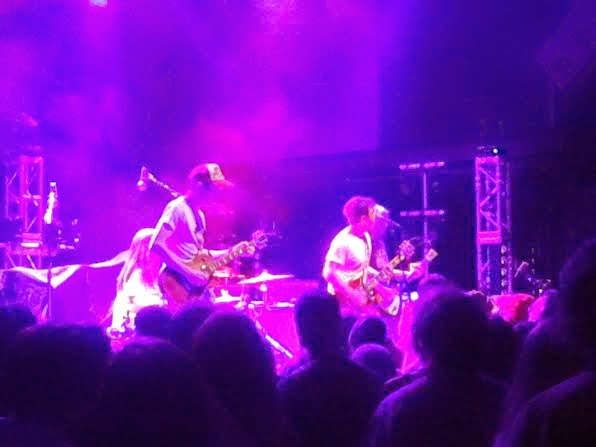 First up, Lee Bains III & the Glory Fires came out and ripped through a set that seemed like a cocaine-fueled punk version of Southern rock & roll.  I do not know how else to put it.  They are a stunning band and watching them on stage is incredible.  Guitars are up to 11, drums are relentlessly pounded, and the bass is forcefully plucked.  Songs from their first album, There Is A Bomb In Gilead, are amped up to a 100 mph speed.  Songs like "Red Red Dirt of Home" have the tempo increased and the songs are transformed.  It works.  I actually prefer the faster versions.  It seems this is the speed Bains and crew are more comfortable in.  When you hear the new album, Dereconstructed, it's clear that this is the new Glory Fires sound: loud, fast, and pissed off.  The set closed with the new song "Dirt Track" of the new album.  It was during this time that the guitarist, to the cheers of 1200+ people, got on Bains' shoulders and both proceeded to give killer solos.  The set lasted about 50 minutes and seemed far too short.  It's fair to say, the boys gained a hell of a lot of new fans that night.

Now the wait for Alabama Shakes began and the crowd was beginning to become electrified.  There was a buzz in the air unlike any show I've been to in a really long time.  Folks seemed not quite sure what to expect.  After all, Alabama Shakes have released exactly one album (Boys and Girls), and that was in 2011- three years ago! 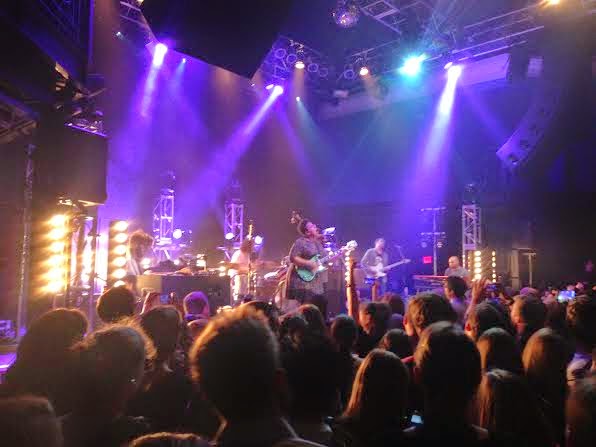 Needless to say, Brittany Howard and crew still had it.  They had the crowd in the palm of their collective hand from the opening note of the opening song.  By the time they reached "Hold On," I thought the place was going to come down.  I have seen many shows at 9:30 Club and I can honestly say that I have never heard the crowd roar as loud as I heard when they ended that song.

They ripped through the majority of their debut album along with a few others that were new, and some that were B-sides and singles; i.e., "Always Alright" and "Heavy Chevy."  Throughout the show, it was clear that Brittany had gained a new confidence that I didn't quite recall from the show in Baltimore a few years back.  This confidence went a long way that night.  She owned the stage.  She proved that being a frontwoman can be a hard and easy task all in one.  She roamed the stage, looking at everyone, singing to them.  I witnessed first hand, I suppose, what it means to gain that confidence and what a difference that made.

By the time the show ended, everyone was wearing the biggest smiles.  Something pretty awesome had just been seen, and no one was quite ready for that.  To be impressed by a band is one thing, but to be blown away by the complete package is another.  We were lucky that night to be in the latter group.  If it sounds like I'm gushing, I am.  We all knew Alabama Shakes had talent.  We knew that they made catchy-as-hell songs.  I'm just not quite sure we expected to be blown away.

As I always say, go see these bands - both of them! - when they come anywhere near you.  I'm confident that you won't be disappointed.  Until then, go buy their music.  Support them.  Let's keep these folks around for as long as we can.  It's a short lifespan sometimes in rock and roll, but these folks deserve to be old-timers.  As Lee Bains III sang, "keep on rollin, keep it on the dirt track."
The latest nonsense from Farcer at 11:30 AM