But, let's not get ahead of ourselves.  Openers are very important and this particular night was no exception.
Opening for Moreland was Caroline Spence.  If you haven't heard of Caroline Spence, you should really give her a shot.  She had a wonderful voice and is really one hell of a song-writer.  Two songs that really stuck out to me were "Whiskey Watered Down" and "Bless Your Heart."  If you're on this site, reading this review, chances are you are going to like her.  You should buy her new album, Somehow, and go see her if she is around.  I had never heard of Caroline Spence and so as I was doing a little research on her after the show, I came across this Rolling Stone article listing her as one of the 10 New Country Artists You Need To Know: Spring 2015.  Don't pass her up, folks!

Maybe 15 minutes after Ms. Spence finished her set, John Moreland took the stage to a loud round of applause.  As he settled onto his stool, the crowd began quieting down, then, as mentioned above, Moreland begins and the crowd is stunningly quiet.  I can't recall who it was now, but someone on Twitter (I believe it was Todd Farrell, Jr.) had said before that their favorite thing to witness was a crowd realizing they were in the midst of something special when John Moreland began playing.  I agree.  100%.  It is unbelievable.  I put it up there with watching Tim Barry. 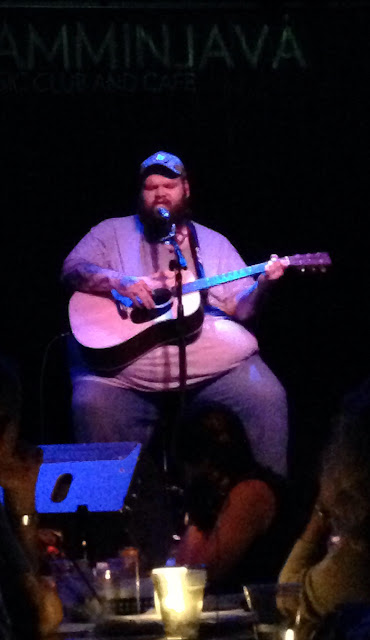 For an hour and a half, Moreland played songs from his first solo album, Earthbound Blues, through the excellent new album, High On Tulsa Heat.  There were a couple of songs in there that I believe were new as well.  During the show, Moreland doesn't speak much, but when he does, he is clever, wry, and self-deprecating.  Before breaking in to "You Don't Care For Me Enough To Cry," he states, "This is a song I recently discovered was too sad for Dallas-Ft. Worth morning television."

This was my second time seeing Moreland, and I was glad to see that the crowd for this show was at least triple the size it was last time.  I hope he continues trending upwards, and with the recent success of this little circle of music we listen to (whatever you want to call it), I believe he will.

I don't think I need to tell you to go see John Moreland if he's in your area.  You know him, you love him- why wouldn't you go see him?  There are few musicians that I can't imagine missing when they come to town and Moreland is absolutely at the very top of that list.  Yeah, you'll feel all of your feelings, but hey, that's what songs are for, right?
The latest nonsense from Farcer at 11:30 AM