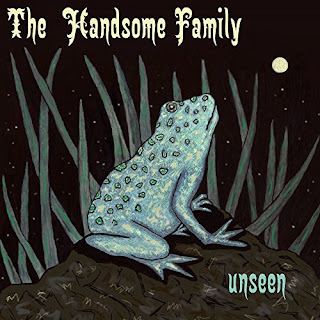 It’s fitting that the Handsome Family – husband and wife duo Brett and Rennie Sparks – used their trademark wry, ironic humor in naming their latest LP “Unseen.” Until a couple years ago they weren’t just largely unheard; they were barely on anyone’s radar at all. Oh, they had a cult following in the U.S. and as is often the case with offbeat American acts, a larger, more vigorous fan base in Europe and the U.K.

Then Matthew McConaughey plucked one of their tunes, “Far From Any Road” as the opening theme for season one of HBO’s True Detective. Never mind that it was released a dozen years earlier (and written, no kidding, about fire ants in the driveway of their Albuquerque home) millions of fans of the compelling mini series scanned the scrolling credits wondering, “Who is that band?” And around the globe the duo’s streaming and downloading exploded, just like that. Looking back, I’m shocked the Coen brothers haven’t made heavy use of them.

“Gold,” the album’s opening cut, finds a gut-shot robber lying in a ditch, looking up at a spiral of $20 bills dancing on the air. Brett once stopped off at a convenience store and saw such a whirlwind of bills and thought, there’s no happy story behind this. And that was all lyricist Rennie needed to weave a graphic, tragic tale. Heck, forget a sound track; the Coens need to write a script around this song.


And who knew William Crookes – British chemist, discoverer of the element thallium and inventor of the vacuum tube – was deeply into spiritualism? Rennie Sparks, that’s who. “Gentlemen” is a fittingly haunting tribute to that portion of his life, perfectly pitched with Brett’s rumbling, low bass. “Gentlemen, I tell you now. I swear, the truth. I saw the table rise; the teacup flew.” The final stanza, with about three layers of Brett’s overdubbed harmonies with himself is testament to his beautiful, deep range. Other cuts find him singing falsetto high tenor harmony to his wife’s melody. Strange and beautiful.

“The Silver Light” should be depressing; there’s nothing happy about gambling addicts pissing their money away in a casino. But the beautifully blended vocals and instrumentation give it an “oh well, it’s still pretty” feel.

The songs are heavily laden with minor chords and make lots of use of the baritone guitar. There’s only one tune approaching upbeat (“The Sea Rose”), and while they’re lyrically downers, the magical, layered harmonies (Brett’s got more range than any baritone/bass on the planet) give all the songs a spacey, almost happy air. It’s all the more striking when you know he recorded the whole thing in his home studio.

It’s rare to find a band with a sound so distinct it’s truly theirs and no one else’s, sui generis in the literal sense. You’ve never heard anyone like The Handsome Family, and you never will. Comparisons to any other are futile. Grab this one up and you’ll wear it out.

Unseen is out tomorrow, September 16, and is available on The Handsome Family website, Amazon, iTunes, and the usual outlets.
The latest nonsense from Farcer at 11:30 AM