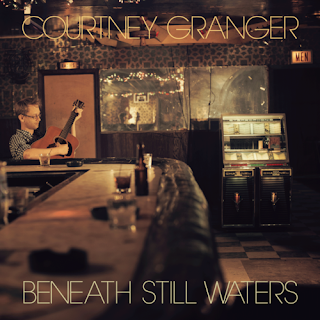 A review by Robert Dean

So, Courtney Granger has a solo record, Beneath Still Waters, and it’s out Friday. It’s nice. It’s warm like bathwater, or a cool like a beer out of the fridge, welcoming as the Louisiana sun.

Granger is best known for playing some mean-ass fiddle in the Pine Leaf Boys, who tend to land more on the side of traditional Cajun/Louisiana music. But, on his first solo record, this is straight up classic country.

Beneath Still Waters doesn’t feel contrived or hokey, or worst of all, trying too hard. There’s nothing worse than some dude breaking his back to come off as a genuine. Even better? This record has nothing to do with Nashville - it’s pure Louisiana, so it’s free of any contextual chains that could poison the product. Instead, the songs on Beneath Still Waters feel like a love letter to George Jones with hints of Merle Haggard, Conway Twitty (lots of Conway Twitty) and you know what? They smoke.

If you’re on a steady diet of the stuff Jason Isbell, Chris Stapleton, or Sturgill Simpson are doing, you need to get Courtney Granger in your life. I think the reason this record hits so hard is that unlike a lot of the garbage chute of music that dumps daily, it’s always a treat to get a homegrown, crowd-sourced record that doesn’t miss a lick.

The playing is airtight, and the songs feel like gut punches. When you’re singing some barroom bummer tunes, that emotion, that vacancy needs to be front and center. That’s why so many artists fail: you can’t fake it. Like an actor, a good country singer needs to be able to draw from the well and pull some serious shit to make your heart ache with theirs. That’s the magic ingredient. Courtney Granger’s got that mojo up in his roux and ain’t nobody’s momma got better. This dude has done Louisiana proud.