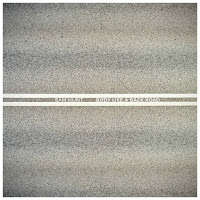 In a recent poll, readers of the popular mainstream country website, Taste of Country, voted Sam Hunt's song "Body Like a Back Road" the best thing to ever happen, like ever. This in addition to the song's all-time record for weeks at #1 on the Billboard Hot Country Chart add to the hit song's growing list of very important accolades.

Eschewing momentous occasions generally regarded as eternally significant by large swaths of the population, TOC's readers instead picked Mr. Hunt's bouncy ode to a lover's body as the greatest single thing in the history of mankind.

Also included in the poll was ratification of the 19th Amendment, giving women the right to vote. A momentous occasion yes, but not nearly as huge as this hunk's silly singalong about a curvy chick. Rather ironic in the context, but none-the-less. 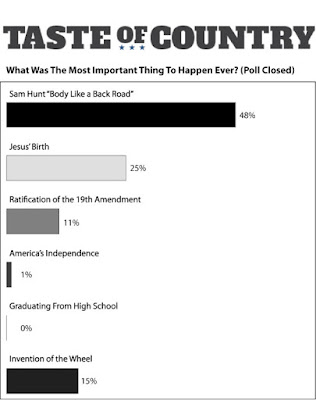 Another loser in TOC's poll was the birth of Jesus Christ. A full 23% more Taste of Country readers believed that a song including the phrase "The way she fit in them blue jeans, she don't need no belt" was of greater import to their lives than God sending his Son to earth to save them from their sins.

Finishing up second-to-last in the poll was America's independence. While this was certainly a great moment in history, Taste of Country's readers felt that Sam Hunt's vapid pop song masquerading as country was of far greater meaning to their lives than the establishment of the free country that most of them hail from.

Some critics will be swift to dismiss the results of this poll and deride its voters, but sometimes a song comes along and touches its listeners on their hips like honey and won't let go. Who are we to belittle Sam's latest victory and the fans who have bestowed this massive honor upon him?

At press time, Taste of Country had just posted a hard-hitting exposé entitled Country Hunks and What They Feed Their Dogs.

Email ThisBlogThis!Share to TwitterShare to FacebookShare to Pinterest
Labels: Body Like a Back Road, Fake News, Sam Hunt, Satire, Taste of Country