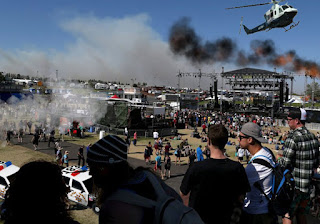 A Thursday night of fun and music descended into chaos, crime, and confusion. Country singer Kane Brown's show was cancelled shortly into the fifth song due to excessive injuries, arrests, and general mayhem.

The problems started before the gates to the Sunnyland Amphitheater even opened. 38 fender-benders were reported in and around the parking areas for the venue. Many concert-goers simply left their crashed vehicles and went to stand in line. One man drove his truck over a fire hydrant, parked, and got out, not even noticing the cartoonish spray of water shooting out from under his F-150.

The line to enter the facility was also the scene of its own maladies. Police reported arresting 312 people there on drug related charges. Most of those arrested were witnessed in the midst of drug deals in plain view of security. One woman had even set up a makeshift crystal meth booth.

Once the gates opened, the actual ticket line fell victim to a comedy of errors. One man was stopped trying to smuggle in a case of beer under his rather large stomach. Ticket takers reported "hand drawn tickets," tickets from previous shows, and Chuck-E Cheese menus presented for entry. It took around 2 hours to get actual ticket buyers into their seats, pushing back the show start time.

Several "pro wrestling style" fights broke out as Brown took the stage, leading to several more attendees taken into custody. Kane laughed off the early rowdiness, telling the crowd "You guys are lit tonight! This place is fire!" Some apparently took him literally, as a grass fire began to rage on the amphitheater's lawn seating area. The situation was worsened by fans' attempts to douse the fire with their mixed drinks. Several minor burns and smoke inhalation injuries were reported and the show was continued after a 45 minute delay.

The final straw was when Kane told the audience to "throw your hands in the air!" Several prosthetic hands and arms were hurled skyward, causing all manner of contusions and concussions upon their descent. This led to several more violent skirmishes. One woman was "pile-drived" onto a stack of folding chairs, leading security to finally and mercifully shut down the concert.

All in all, there were 602 arrests, 97 injuries, and nearly $800,000 damage to Sunnyland Amphitheater. Kane Brown could not be reached for comment. Sunnyland Mayor Charles Rickles would only shake his head and tell us "These folks are really, really stupid."