Sam Morrow has invited favorable comparisons to Little Feat and Lynyrd Skynyrd – rightfully so and for the very best reasons. In “Money Ain’t A Thing,” (heard only here at FTM) he captures a ballsy everyman ethos that’s the mirror image of “Workin’ For MCA.”

"'Money' is a song that reminds me of what’s important through all the distractions or stresses we get fed on a daily basis,” Morrow says. “Whether it’s the expectation to look a certain way or something you need to buy, it’s important for me to constantly remind myself that I don’t need those things.”

His forthcoming album, Gettin’ By On Gettin’ Down, drops October 30. Keep it here for updates; it’s one of the best American rock, rhythm & blues records in a while. The dude jams.  “All I need’s my guitar and my sh*t-kickin’ band,” indeed. 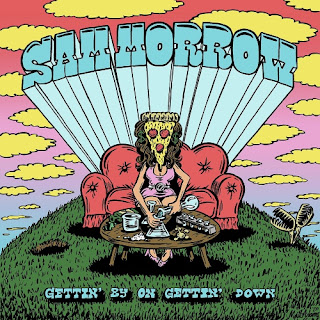 August 4, 2020 - Sam Morrow will release his new album Gettin' By on Gettin' Down October 30th via Forty Below Records. It’s a modern album that revisits — and reshapes — the primordial sounds of hip-shaking rock & roll. These nine songs are rooted in grease, grit, and groove, from the swampy soul of "Round 'N Round" to the funky syncopation of "Rosarita" to the hook-laden rock of "Money Ain't a Thing." There's hardly an acoustic guitar in sight; instead, amplifiers and guitar pedals rule the roost, with everything driven forward by percussive rhythms that owe as much to R&B as country music. Written and recorded in the wake of the tour for Morrow’s breakout record Concrete & Mud, Gettin' By on Gettin' Down doubles down on the electrified fire and fury of Morrow's live shows, with a road-ready band joining him on every song.

"My favorite rock & roll is the stuff that has groove to it," says Morrow, a native Texan who kickstarted his music career after moving to Los Angeles, where he's since become one of the city's biggest roots-music exports. "I want to make music like that — funky, layered rock where it's not just the songwriting that's important, but the presentation, too."

To find the right presentation, Morrow turned to drummer Matt Tecu, whose versatility as a percussionist had landed him a spot in the documentary Echo in the Canyon, backing up West Coast icons like Jakob Dylan, Brian Wilson and Neil Young. The two had spent months on the road together, touring their way from coast to coast, steadily growing Morrow's sound into something that nodded to — but was no longer defined by — the country music he'd grown up with. Looking to funnel the spirit of those concerts into a studio recording, Morrow asked Tecu to send him a series of drum beats, which the frontman then turned into songs with help from co-producer Eric Corne. The grooves served as building blocks for the music that followed, anchoring Gettin' By on Gettin' Down in a rhythmic, full-bodied sound whose mix of country, rock, and funk influences nodded to Morrow's genre-bending heroes: Little Feat, Los Lobos, Queens of the Stone Age, and even David Bowie.

While recording the album at an L.A.-area studio owned by The Doors' guitarist Robby Krieger, Morrow and Corne embraced their experimental side, focusing on layered arrangements that were as unique as the songs themselves. They added a T. Rex-worthy, fuzz-rock riff to the title track. They punctuated "Rosarita" with a slide guitar wrapped in wah-wah wooziness. They filled "Round 'N Round" with blue notes and swung swagger. Over six days, they pieced together the Gettin' By on Gettin' Down tracklist, with help from guest musicians like guitarist Doug Pettibone and bassist Taras Prodaniuk, both veterans of Lucinda Williams' band. The result is a record that builds a bridge between Morrow's command as a frontman and bandleader — a record, in other words, that pairs sharply-written insight from a songwriter at the top of his game with the raw, rocking slash-and-burn of a band stocked with roots-music heavyweights.

Morrow’s 2018 album Concrete & Mud was a true breakout, earning critical praise and radio success. Vice called Morrow “LA’s young prince of unabashed Country gold,” KCRW declared “Sam Morrow's third album cements his place as a member of LA’s Country elite,” and Rolling Stone said “Concrete And Mud’s vibe is less sunshine and palm trees and more in line with the hard surfaces and grit of it’s album title…Morrow pairs his brawny voice and tales of life at the margins with brittle funk grooves and greasy slide guitar licks." The album made it into the top 10 at Americana radio, album standout “Quick Fix” was featured on Showtime’s hit show Billions, and Morrow toured relentlessly in support of the record in both the U.S. and Europe. NPR Music said Morrow’s 2018 AmericanaFest set was one of the festivals “most anticipated,” going on to say “If you're a fan of Little Feat, Tony Joe White and classic Lynyrd Skynyrd, then Sam Morrow has it all for you: He's the essence of Americana, blending together diverse styles of roots music, and his showcase set at The Local more than delivered on the anticipation for it.”