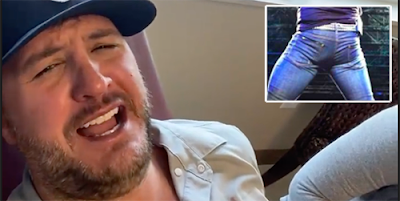 While practicing for his upcoming return to touring, country superstar Luke Bryan tore his moneymaker. Doctors have put him on bed rest while he recuperates from the serious injury to his most important feature.

Sources say Bryan was winding up for his crowd-pleasing butt thrust featuring a patented shit-eating grin when he grabbed at his lower hiney area and fell to the stage crying. “It was bad,” said guitarist Michael Carter. “Our paychecks depend on his ass, literally, so we all gasped when his strongest attribute failed him.”

While fans surely come out to Luke Bryan shows for the fun, drinks, and upbeat pop-country music, many of his (mostly) female fans cast their gaze a bit lower for his biggest draw. “Oh, that sugar shaker,” laughed Lera Towson of West Memphis, AR. “I can’t name more than three of his songs, but that thang keeps me coming back! I hope it’s, I mean, I hope he’s going to be okay!”

“I diagnosed the patient with a grade 3 rupturing of the left booty cheek,” said Dr. James Keister, Luke’s physician. “All that time off during the pandemic got him a bit rusty and now he’s going to have to keep his rump in repose for a few weeks.” Bryan’s Proud to Be Right Here tour will be delayed into at least July.

Bryan, for his part, was upbeat but taking things in stride. “Some have said I should just go on tour and sit on a pillow and sing my songs, but who goes out to a concert just to hear music?” laughed Bryan. “My fans can rest assured that in a month or so, my ass will be back at 110%!”