Fiddle & Steel Band Not Sure What Genre They Are 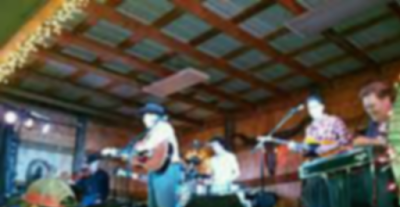 A new band out of Alabama, Ohatchee, is facing a difficult question as they navigate the terrain of the touring band life. When booking shows, which they still do without management, they are often met with the question: What genre are you? The band has no idea.

“We play the good kind of music,” laughed twangy lead singer/guitarist Hap Lorring. “Anyway that’s what an annoying positive fan of the band always comments online and I think it’s dopey as hell, but then again, I don’t know what genre we are.”

The quintet features a steel guitarist, fiddle player, drummer, bassist, and lead guitarist/vocalist and play what might be described as “a mixture of ballads and dance tunes of a sort of music originating in the rural southern US,” but that’s more than a mouthful to tell club owners and event planners.

Some fans of Ohatchee have called the group “Americana,” but the guys aren’t even sure what that is. “Isn’t that just an adjective to describe those roadside attractions like ‘World’s Longest CVS Receipt’ or ‘Largest Ball of Chewed Up Gum in Nebraska?’”

“We’re not folk either,” said Lorring. “I listened to some popular folk songs on Spotify, and we don’t clap and sing ‘ohhhh’ that often. I’m really at a loss here.”

“My grandfather said ‘Boy, ya’ll are just good ol’ country music’,” said lead songwriter and bassist Chad Logan. “But he’s senile. I listened to country radio and we don’t even have a rapper in the band so we must not be country.” Logan went on to say that Ohatchee doesn’t employ a DJ and doesn’t write songs about picking up a girl in a bar and driving out to the country with her to make love in a sixty-thousand dollar pickup truck. They also lack programmed beats, six pack abs, and mediocrity, so nope, not country.

Whatever the hell they are, Ohatchee rolls on to play the Kudzu and Possum Festival in Winona, MS this weekend.