Welcome to the inaugural edition of Mixed Music Action, a hybrid back-and-forth between Jeremy Pinnell and Kevin Broughton that touches on the worlds of music and mixed martial arts…and whatever else may suit them.

When Kevin interviewed Jeremy last fall in advance of the release of his phenomenal album, Goodbye L.A., he was delighted to learn that Jeremy practices Brazilian jiu-jitsu and, like himself, is a big fan of the UFC. Two guys, two great topics and a platform like FTM? To quote UFC ring announcer Michael Buffer – though much more succinctly – “It’s time!”

KB: I caught a show with an artist last weekend -- the second-to-last show on this tour. He was really struggling with his voice, and I didn't envy him on the next night's show. That has to be a common problem in your line of work. Do you have a go-to, emergency throat remedy, beyond gargling salt water?

JP: First of all I want to say I’m happy we’re doing this. Gonna be fun.

So, losing your voice happens a lot. When you’re singing two hours a night -- and we’ve done four-hour nights -- it’s unavoidable. I supplement while on the road: Vitamin C, Vitamin D… I try not to smoke cigars. Throat Coat has been proven to work when necessary. But you have to go hard.

KB: When I recently asked you what's good to listen to these days, your first answer was the new Cactus Blossoms album. They remind me a lot of the early Jayhawks, right down to the Minneapolis roots. What about them do you find so appealing?

JP: I just dig their Everly Brothers sound. The harmonies, the hooks, the songwriting, etc. I also dig the Jayhawks and have seen them twice. Once when I was 16, they opened for The Black Crowes at Riverfront Coliseum 1993. The lights were on and people were strolling in when The Jayhawks played.

KB: Two poignant answers there. In a subtle way, you let me know that I’ve got a decade-plus on you, and now I’m jelly that I never saw the Jayhawks open for the pre-implosion Black Crowes. Whose idea was this feature, again?

Anyway, what's up with JP these days? You touring, raising young 'uns, rolling in the BJJ studio? A little of everything?

JP: I’ve been able to hit the Carlson Gym a little more, but touring is picking up quite a bit. I’m looking forward to summer. Yesterday was open mat at the gym, and my son and I went down, and some surrounding gyms showed up and everyone rolled for a couple hours. It was really cool seeing my son use the things he’s learned and enjoy himself. He’s seven, by the way. He and I have been enjoying Brazilian Jiu Jitsu quite a bit.

KB: Looking ahead to this weekend's UFC 272 card: The main event has "must see" written all over it, and to say there's bad blood between Colby Covington and Jorge Masvidal is like saying Jon Tyler dabbles in conspiracy theories. Covington is a sizeable favorite, and his only recent losses are to Welterweight Champion Kamaru Usman. Jorge is a fan favorite who needs a win. 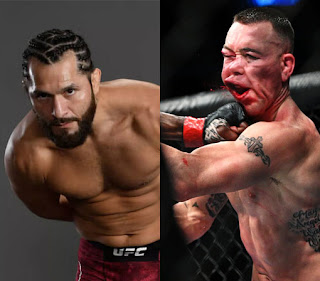 Your thoughts on the matchup, please, and give me the winner and method of victory. I'll even go first and say Covington by unanimous decision; his wrestling's too much.

JP: So I talked to my BJJ instructor and asked him his thoughts. I’m a Jorge fan obviously, but he said Colby will probably wear him down by using his wrestling, and probably win by decision. But the cool thing about a fight is, anything can happen! I think Jorge is fighter’s fighter. I don’t think anyone will like Colby even if he does win.

KB: Hmmm. Going to a ringer for advice on picks? I mean, I’m not calling Brent Cobb or Leroy Virgil for advice on what music questions to ask, but whatever.

Finally, pick me another winner on this fight card.

JP: I like Kevin Holland, but Alex Oliviera is fierce. I’ll take Alex. I’m also taking Edson Barboza over Bryce Mitchell, even though I like Bryce more. But who knows?*